The fourteenth entry in The Five-Year-Old’s ongoing Photo Documentary series about the Dedham Public Art Project.

This week, The Five-Year-Old visits Totem, the Mother’s Rabbit designed by 89-year-old Martha Taylor and painted by Martha and her daughter SarahJane Cassie (the artist who painted Ace). Local readers can find Totem in Riverside Park at Riverside Drive and Bridge Street in Dedham.

Most of the time, I am indebted to the work of other people for whatever background on the artist I can share with you in these introductions to the rabbits. Sometimes my information comes from the artist’s website. Sometimes I can draw from articles written by journalists at the Dedham Transcript (Wicked Local Dedham), boston.com and other local news outlets. Other times, my fellow bloggers make my life easy by documenting the rabbit’s creation or interviewing the artist before The Five-Year-Old and I visit the bunny. And if all of that fails, I can always count on Monika Wilkinson and Jennifer Barsamian at Dedham Shines to help out by sending me the artist’s biography or facilitating contact through email or Facebook so that I can get the answers to The Five-Year-Old’s most pressing questions.

But this week, in a rare act of journalism, The Five-Year-Old and I have actually interviewed the artists behind Totem the Mother’s Rabbit ourselves.

I know. I was surprised too. Here’s what happened.

When The Five-Year-Old saw Totem, her first reaction was to hug it. Her second was to take pictures of it, because she is a faithful photojournalist. Her third was to ask if she could meet the artist who painted it.

When I passed The Five-Year-Old’s request to SarahJane Cassie, the immediate response was an invitation to “Grandmother’s house” for a tea party — “dolls and teddy bears welcome.” Which is how a very excited The Five-Year-Old, an unexpectedly shy Tigery, and I came to spend a delightful Wednesday afternoon with Martha Taylor, SarahJane Cassie, and Martha’s rather remarkable collection of toys.

“Do you play?” Martha asked me early in our visit after I remarked on the floor-to-ceiling wall of cubbies that houses her toy collection.

I was rather sorry to respond that I didn’t play nearly as much as I should.

And just like that, The Five-Year-Old commandeered Martha and her long-haired Dachshund SueSue for the afternoon.

Although I generally like to have The Five-Year-Old be the one to ask the questions, I could see that she was far too busy to think about rabbits.

Fortunately, SarahJane was not. Over cups of tea and Martha’s ridiculously tasty almond cake, SarahJane told me that the idea of using totems on the Mother’s Rabbit actually came rather late in the process. In the beginning, her mother simply wanted to paint a rabbit that looked like a rabbit. A brown rabbit to be precise. Like this one.

“That rabbit is the model for all of our rabbits,” Martha told me as she introduced The Five-Year-Old to a well-loved wind-up kitten. Turns out SarahJane had also used this rabbit as the model for the one in the mural she painted in the entryway to Martha’s house.

After Martha picked the palette for her rabbit, the design evolved to include animals found in the Dedham area.

It was SarahJane’s son who first introduced the idea of totems into the creative process.

“That rabbit reminds me of Native American totems,” he remarked one evening as his mother and grandmother were working on the rabbit. The remark prompted SarahJane to spend hours researching totems, the practice of using animals and plants to symbolize specific characteristics or qualities. She pulled much of her information from Cathy Ginter’s Animal Totems website. 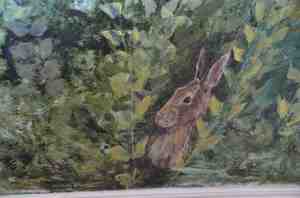 The rabbit from SarahJane’s mural in her mother’s entryway. (Photo: Shala Howell)

That research convinced her that Totem would be an excellent name for the Mother’s Rabbit. The final design includes an owl for wisdom, a raccoon for friendship, and a turtle to remind us that however slow we may feel, we are in fact making steady progress. The rabbit shape itself is an emblem of luck.

“Those animals are my mother really,” SarahJane said as we watched Martha and The Five-Year-Old, who had by this time moved on to a squawking crow puppet. “She’s always trying something new, always doing something creative.”

A heron from the mural in the front hall. (Photo: Shala Howell)

“I always say that I’m a painter, but my daughter is an artist. There’s a real difference you know,” Martha said. “She was always telling me ‘don’t worry, we can fix that.’ I would paint an animal and its ears would be too round or its eyes too big. She’d come in here at the end of the day and take a very fine brush and just fix a line.”

And then there was the matter of the eyes. Martha couldn’t believe it when SarahJane asked her to paint the eyes red before painting them black.

“That’s what gives them their retinal depth,” SarahJane said. “If you look very closely you can see flecks of red.”

Flecks of red which unfortunately aren’t captured in The Five-Year-Old’s pictures. I say this every week, but only because it’s true: You really need to get out there to see these rabbits for yourselves. Our photos simply can’t do justice to the beauty of these rabbits.

And this is especially true in Totem’s case. The meticulous attention to detail and use of symbolism make this rabbit one of the most realistic and mythical designs I’ve seen all summer. The combination is simply stunning.

And with that, The Five-Year-Old proudly presents Totem, the Mother’s Rabbit by Martha Taylor and SarahJane Cassie. 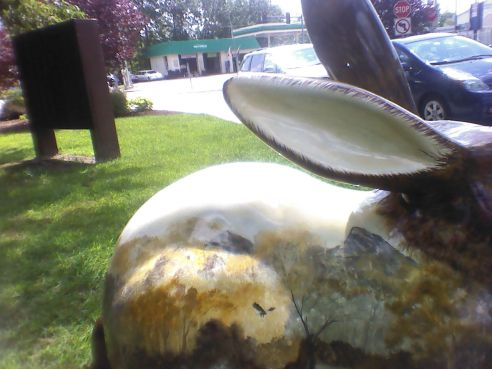 Can you spot the owl? (Photo: The Five-Year-Old)

From the other side. 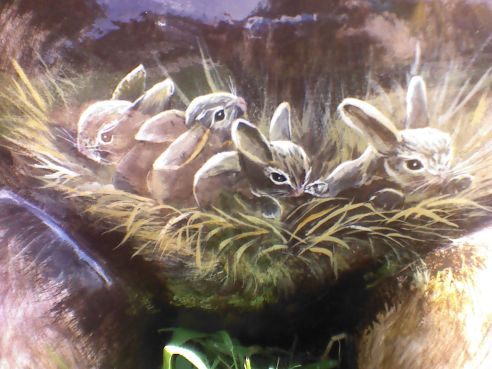 And finally, The Bunny Eye-View.

Be sure to tune in next week, when The Five-Year-Old visits the Racecar Rabbit by Dawn Scaltreto.

2 Responses to “Through the Lens of The Five-Year-Old: The Bunny at Riverside Park”