The third entry in The Five-Year-Old’s ongoing Photo Documentary series about the Dedham Public Art Project.

This week on Through the Lens, The Five-Year-Old visits the controversial Peace Bunny at Oakdale Square Common.

Oakdale Square is a meticulously landscaped common in Dedham, Massachusetts. Half of the common houses a beautifully maintained memorial dedicated to the memory of Dedham-area veterans who have served in wars around the world through the centuries.

Captains Oliver and Varnum Taylor, who fought in the 1786-7 Shays’ Rebellion in Massachusetts have a stone along the memorial’s walkway, as do the Podolski brothers, who fought in WWII. They are joined by countless other Dedham residents who served our country in wars ranging from the Revolutionary War to the most recent conflicts in Iraq and Afghanistan.

The Shays rebellion, fought in central and western Massachusetts, was fought by Daniel Shays and other veterans of the Revolutionary War in protest over the severe economic hardships they faced after war’s end. Shays, like many other veterans was unable to collect back pay owed to him by the government for his service in the war. When he found himself debt-ridden, stripped of his lands, and shamed in court for failing to pay taxes, he organized a protest to shut down county courts to stop the judicial hearings for tax and debt collection. (Photo: Shala Howell)

The Peace Rabbit sits in the other half of the common on an open lawn studded with trees. From a distance, the rabbit, designed by local artists Jill Barry and Mike Glowacki, himself a veteran of the wars in Iraq and Somalia, appears to be simply white, if a bit sparkly. As you approach it, you can see that it’s covered with thousands of pieces of glass. According to Wicked Local, the grout used on the rabbit glows in the dark, a fact that The Five-Year-Old is very anxious to verify for her readers. Bedtime being what it is, however, that verification will have to wait until winter, when sunset will once again precede pajama time.

Because Barry and Glowacki dedicated the rabbit to the

the organizers of the Dedham Shines project felt it was most fitting to locate the Peace Bunny on the Oakdale Square Common. After consultation with the Dedham Board of Selectmen, the Parks and Recreation Commission and the Oakdale Square Alliance (the group responsible for developing and maintaining the memorial), Dedham Shines decided to install the Peace Bunny on the portion of the common used by the town for other non-veteran-specific community events, such as the annual tree lighting ceremony and the summer Superhero Night.

Unfortunately, many veterans living in Dedham consider the veterans’ memorial at Oakdale Square to be sacred ground on which a bunny has no place, even if that bunny was designed by an Oakdale veteran in honor of another Oakdale veteran.

Being neither veterans nor residents of Dedham, The Five-Year-Old and I do not feel qualified to comment on this controversy. We are going to stick to the much more fun task of bringing you the rabbit as The Five-Year-Old sees it.

So without further ado, we present the Peace Bunny at Oakdale Square Common.

From the side, with the War Memorial in the background: 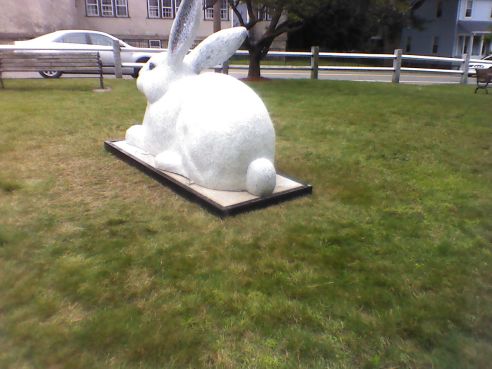 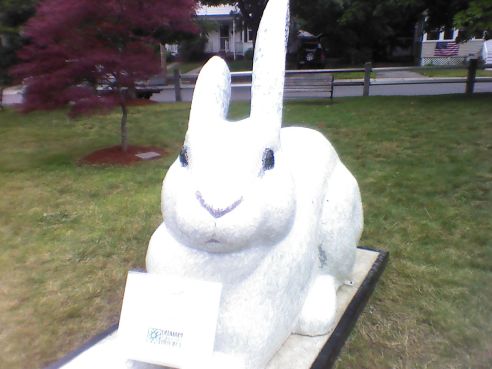 And The Five-Year-Old’s favorite shot: Bunny with Gran.

All of the bunnies are worth seeing in person, but the subtle beauty of this particular bunny simply can’t be captured on a five-year-old’s camera (or sadly, on that of her mother). If you are in Dedham this summer, I encourage you to see the Peace bunny for yourself. But you’ll have to hurry. I hear the bunny’s lease is up in September.

You can see more of Barry and Glowacki’s work, including a picture of the Peace Rabbit glowing in the dark, at Dedham Glass Art.

Tune in next week, when The Five-Year-Old visits Bunny in the Clouds at Petruzziello Plaza.

11 Responses to “Through the Lens of The Five-Year-Old: The Bunny at Oakdale Square Common”