It’s March, which means that any day now, The Six-Year-Old will morph into The Seven-Year-Old. The Six-Year-Old is slightly obsessed with dragons (and their Viking trainers) at the moment, thanks to Cressida Cowell’s How to Train Your Dragon books, so we are planning a dragon (and Viking)-theme birthday party for her.  Naturally, the topic of what kind of birthday cake we should serve came up.

Years ago, I made an Icelandic Devil’s Cake in conjunction with United Nations day at my daughter’s preschool. I can’t remember if I actually carried the cake in to share with others. I might not have, because that cake was AMAZING. And frankly, I’m not good at sharing AMAZING.

Since the Vikings settled Iceland, I thought our Dragon and Viking themed party would be the perfect time to trot out that cake again.

Mommyo, pleadingly: “But I could shape the cake like a dragon’s egg and decorate it with little swirly spots of frosting to look like spots.”

Mommyo, curiously: “Why not? It’s an authentic Icelandic recipe. Something the Vikings might have eaten. I thought you’d think that was cool.”

The Six-Year-Old, decidedly: “That cake was disgusting.”

Mommyo, calmly: “You must be remembering a different cake. That cake had layers of deliciousness, dark cocoa, chocolate chips, chocolate frosting, butter…”

The Six-Year-Old, disgustedly: “And bananas. I hate bananas.”

Mommyo, sadly: “Are you sure you’re remembering the right cake?”

So I did. Come with me into the Caterpickles Way Back Machine. Mind the gap.

Mother, after mashing up a banana to use as the middle layer in a traditional Icelandic devil’s cake, thinks, “Mashed bananas were the first food I ever fed to The Four-Year-Old. I bet she’d think that was cool.”

Without putting any further thought into it, Mother digs in the silverware drawer for a Gerber baby spoon leftover from those halcyon early foodie days. Prepping it with a bit of mashed banana, she carries it into the playroom where The Four-Year-Old is relaxing in front of a Clifford cartoon.

Mother, excitedly: “Look, The Four-Year-Old, it’s the first food I ever gave to you as a baby! Want to try some?”

The Four-Year-Old, totally repulsed, scrambles under the couch cushions in her haste to get away from the scary slimy spoonie thing: “What. Is. That?”

Mother, still trying to keep that sentimental feeling: “Mashed bananas. You used to love them.”

The Four-Year-Old, hand over mouth, just shakes her head and looks vaguely sick.

Mother, abashed, walks back to kitchen, and dumps the rejected bananas into the sink. She pulls out a five from her wallet and puts it in The Four-Year-Old’s Future Therapy tin. We may not be able to fully fund her college, but by George, her therapy sessions will be completely covered.

It’s not actually a good plan to have The Six-Year-Old bake her own cakes for her party in her Easy Bake Oven, right?

Oh well. At least The Six-Year-Old has the party decorations well in hand. 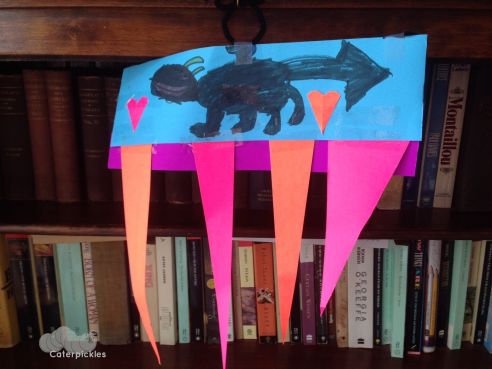 5 Responses to “What do you serve to a party of dragons?”