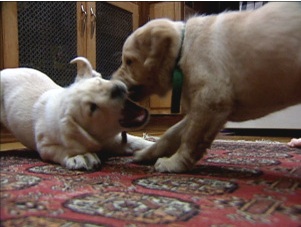 There will be dancing, cupcake making (and decorating), a surprisingly intense Bendominoes tournament, and snacktime (aka cupcake eating). And no doubt, once The Five-Year-Old reads today’s Caterpickles, there will also be puppies for rent.

That’s right, according to the Daily Herald, it is apparently now possible to rent puppies by the hour in some parts of the U.S.:

“Miller’s Puppies for Rent business started up this summer. It was targeted at BYU students who don’t have the opportunity to have pets. …

While Miller started the business to cater to BYU students, word got out and now Utah Valley University students, families and single working folks are all renting puppies. Corry said he’s delivered puppies for dates, birthday parties and surprise gifts and one mom rented a puppy for her daughter as a reward.”

For those of you concerned about the fate of the dogs once they are no longer cute, rentable puppies, the owner of the business, Jenna Miller told the Daily Herald that most end up being adopted by former renters.

Apparently a fair number of her renters use the puppy rental experience as a way to test out whether or not they would be any good as dog owners.

Now if you will excuse me, I have a house to clean. The Five-Year-Old expects the guests for today’s party immediately after breakfast. I don’t know what she expects me to do with them while she’s at school, but knowing The Five-Year-Old, I’m certain there’s a plan.

So, what’s on your agenda for the weekend?

3 Responses to “If The Five-Year-Old throws you a party, it will include puppies…”