In the Before Times when I was childless, I swore that if I ever did have a child, I would read every single book my child did. This sounded like an excellent plan, in the absence of any real information.

Once I had a child, I actually tried it. At first, it was easy. Especially in those first few weeks, when my daughter could only enjoy a book if someone held it for her.  But once my daughter gained the ability to grab board books independently, I started to fall behind.

For a while I caught up, thanks to my daughter’s decided preference for reading the same books over and over again and our family’s decision to work story time into the bedtime process. It also helped that picture books are short, so I could read lots of them in one sitting.

Still, I could see where things were going. By my daughter’s second birthday I knew I would never be able to keep up with my daughter’s reading over the long haul. Instead, I decided to simply keep an eye on what she read, read any book that she seemed particularly obsessed with, and continue to read certain books out loud with her.

Fast forward nine years, and her books are too long to read out loud. We still listen to audiobooks as a family on road trips or while crafting together, but for the most part, our family reads independently.

Still, I’m a firm believer in parents and kids reading books together well into middle school.

Talking about books is simply fun. And if the book happens to touch on an issue that your middle schooler is struggling with, it can create a marvelous opportunity to talk about some deeply personal issues from a not-so-personal angle. That gives your child a chance to think about how he or she would respond if a similar situation came up in the real world, and you a chance to dole out some parental wisdom without making your child think you are chastising her actual behavior.

As a result, I’m always on the look out for books to share with The Eleven-Year-Old. Here are four of our favorites from Family Book Club this past year.

Legends of the Guardians: The Owls of Ga’Hoole by Katherine Lasky 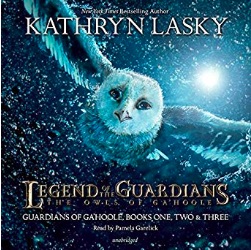 “This box set contains the first three books by Kathryn Lasky, which are the basis of the animated movie, Legend of the Guardians: The Owls of Ga’Hoole.

The Capture, Book One
Soren is born in the forest of Tyto, a tranquil kingdom where the Barn Owls dwell. But evil lurks in the owl world, and Soren is captured and imprisoned in a dark canyon where there is a mysterious school. It’s called an orphanage, but Soren believes it’s something far worse. He and his new friend, the clever and scrappy Gylfie, know that the only way out is up. To escape, they will need to do something these fledglings have never done before – fly.

The Journey, Book Two
It began as a dream, a quest for the Great Ga’Hoole Tree, a mythic place where an order of owls rises each night to perform noble deeds. There, Soren, Gylfie, Twilight, and Digger hope to find inspiration to fight the evil that dwells in the owl kingdom. When Soren and his friends finally arrive at the Great Ga’Hoole Tree, they face challenges they never imagined.

The Rescue, Book Three
Ever since Soren was kidnapped, he has longed to see his sister, Eglantine. Now, Eglantine is back in Soren’s life, but she’s been through an ordeal too terrible for words. At the same time, Soren’s mentor, Ezylryb, has mysteriously disappeared and may be in danger. Something deep within Soren tells him there is a connection between these mysterious events. To rescue Ezylryb, Soren must face a force more dangerous than anything that even the evil rulers of the owl orphanage could have devised.”

What we liked about them:

True confessions: We watched the movie first, and were content with that experience. We might never have read the books at all, frankly, if we hadn’t stumbled across the audiobook at the library shortly thereafter.

While listening to the book, we quickly realized that they left a ton of stuff out in the movie. That made for some interesting conversations about narrative choices and owl habits. Both The Eleven-Year-Old and I preferred the story arc and species insights included in the book. She does want me to warn you, though, that the audiobook is super long (16+ hours). “I could have finished the books faster if I’d just read them myself, Mommyo.”

Pack of Dorks by Beth Vrabel

“Lucy knows that kissing Tom Lemmings behind the ball shed will make her a legend. But she doesn’t count on that quick clap of lips propelling her from coolest to lamest fourth grader overnight. Suddenly Lucy finds herself trapped in Dorkdom, where a diamond ring turns your finger green, where the boy you kiss hates you three days later, where your best friend laughs as you cry, where parents seem to stop liking you, and where baby sisters are born different.

Now Lucy has a choice: she can be like her former best friend, Becky, who would do anything to claim her seat at the cool table in the cafeteria, or Lucy can pull up a chair among the solo eaters—a.k.a. the dorks. Still unsure, Lucy partners with super quiet Sam Righter on a research project about wolves. Lucy connects her own school hierarchy with what she learns about animal pack life—where some wolves pin down weaker ones just because they can, and others risk everything to fight their given place in the pack. Soon Lucy finds her third option: creating a pack of her own, even if it is simply a pack of dorks.”

By turns hilarious, painful, and wise, this book is above all real. It’s so easy to relate to Lucy, Sam, and April. We all know Beckys, and many of us have been Becky at one point in our lives.

As a parent, I especially appreciated how Beth Vrabel made it clear that being a good friend is something you have to learn. You will make mistakes. Other people will hurt you by making mistakes of their own. The trick is to grow past it.

Excerpt from the Amazon Book Description:

“Winner of the Hugo and Nebula Awards

In order to develop a secure defense against a hostile alien race’s next attack, government agencies breed child geniuses and train them as soldiers. A brilliant young boy, Andrew “Ender” Wiggin lives with his kind but distant parents, his sadistic brother Peter, and the person he loves more than anyone else, his sister Valentine. Peter and Valentine were candidates for the soldier-training program but didn’t make the cut—young Ender is the Wiggin drafted to the orbiting Battle School for rigorous military training.

Ender’s skills make him a leader in school and respected in the Battle Room, where children play at mock battles in zero gravity. Yet growing up in an artificial community of young soldiers Ender suffers greatly from isolation, rivalry from his peers, pressure from the adult teachers, and an unsettling fear of the alien invaders. His psychological battles include loneliness, fear that he is becoming like the cruel brother he remembers, and fanning the flames of devotion to his beloved sister.”

Now for the honesty. The Eleven-Year-Old found the movie intriguing enough to start reading the book. But she quickly lost interest in it. That was disappointing.

Still, watching the movie together as a family was enough to spark some conversations about dealing with social isolation and bullying.

The Cat Who Said Cheese by Lilian Jackson Braun

Format: Audiobook
Age Range: Written for adults. But, The Eleven-Year-Old assures me, aside from some references to drugs, these books are totally ok to talk about on Caterpickles.

In this mystery in the bestselling Cat Who series, a murder sends Jim Qwilleran and his cats, Koko and Yum Yum, on a trail that will demand all their feline intuition and mustachioed insight…

With the Great Food Explo approaching, there’s a lot of scrumptious activity in Moose County. Residents can’t wait for the restaurant openings, the cheese-tasting, and the bake-off, among other festivities. But there’s nothing as tasty as a morsel of gossip, so when a mysterious woman moves into the New Pickax Hotel, the locals—including Qwill—indulge in lots of speculation. But then a bomb explodes in her room, killing the hotel housekeeper—and now Qwill and his kitty sidekicks, Koko and Yum Yum, must put aside the fun and figure out who cooked up this murderous recipe…

Middle schoolers are at an interesting age when it comes to reading books. They still love books written expressly for their age group, but they are profoundly curious about the books their grown-ups are reading. Every time I pick up a book, The Eleven-Year-Old clambers onto the arm of my chair and asks to read its back cover. Sometimes she asks to read the book itself, but given the type of mysteries I typically read, this rarely seems like a good idea.

That said, I’ve had my eye on Lilian Jackson Braun’s The Cat Who… series for several years. I’ve never actually read one until this year, because frankly, the thought of a cat detective feels both gimmicky and improbable to this adult reader. But once The Eleven-Year-Old began campaigning in earnest to be allowed to read grown-up mystery novels, I decided to give Braun’s cat detectives a try.

Discovering that our local library had not one, but four, The Cat Who… audiobooks available for loan clinched the deal. The books themselves are a charming combination of inside cat jokes, gossip about small town life, and murder with petty crimes on the side that work very well as spoken tales. The Eleven-Year-Old absolutely adores them. So if you and your mystery-curious middle schooler like that sort of thing, you might want to give these a try.

Found any good books to share with your middle-schooler lately?

One Response to “4 books that share well with middle-schoolers”