In lieu of bringing you our weekly external news round-up, I’d like to bring you up to date on happenings here at Caterpickles Central, as it’s been an unusually exciting week. First the good news.  I have a bike! Here it is, all cleaned up and ready to hit the trails this afternoon with The Five-Year-Old after her First Full Day of Kindergarten! (Thank you, Cullen and Vic!) 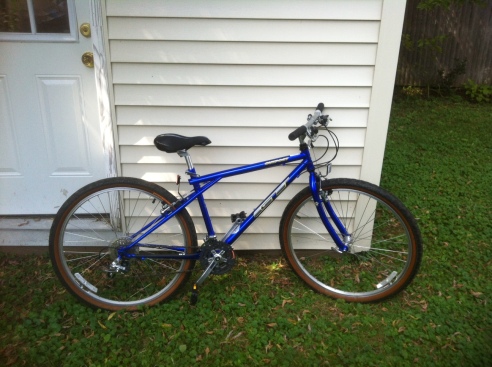 Is school out yet? (Photo: Shala Howell)

Isn’t it fabulous? The Five-Year-Old and I have been having such an amazing time riding around the neighborhood all week that we’ve kind of dropped the ball on documenting the arrival of the latest Dedham bunnies.

Which brings me to the sad news: Dawn Scaltreto’s Pete Hamilton Racecar Bunny was vandalized this week. I’d post a picture for you, but the news broke at Caterpickles Central shortly before The Five-Year-Old was due to report for her first full day of kindergarten this morning. The photo shoot will have to wait. Still, we’re heartbroken that yet another of these gorgeous bunnies has been attacked.

Rounding out the week was a very nice conversation over Ben & Jerry’s with Catherine Gruetzke-Blais, the artist behind the Regal Rabbit stationed at the East Dedham Shopping Plaza and a trip to see Mary Poppins at the newly renovated Norwood Theatre. Both of which I’ll tell you about in more detail next week.

So what have you been up to?