In case your neighborhood hasn’t been overtaken by Girl Scouts peddling cookies, consider this a public service announcement: It’s Girl Scout Cookie Season. Sales end (in Northern California at least) on March 4, so if you were planning to buy cookies this year but haven’t, you might want to get on that. Find a troop near you.

The Ten-Year-Old is cranking away at the cookie sales. Of the types of sales available to her — door-to-door, digital, and booth — she loves booth sales the best, in part because customers share stories about when they were Girl Scouts, and how much the cookies cost then. The lowest price we’ve uncovered so far in our field research is 50 cents from a woman who claims to have sold cookies about fifty years ago.

This weekend, we were told that Thin Mints have been sold almost from the start

We picked up another tidbit over the weekend that has my daughter’s mind whirling. Thin Mints are by far the most popular cookie around here, and this weekend we were told that Thin Mints were the third Girl Scout cookie ever introduced. The customer who told us this said that back in those early days, she sold a vanilla cookie, a chocolate cookie, and Thin Mints.

I’ll admit, this blew our minds a little. We knew that the Girl Scouts celebrated the 100th Anniversary of Girl Scout Cookie sales last year, but had no idea Thin Mints might have been one of the original cookies. So naturally, The Ten-Year-Old wanted to know if it was true.

When did Girl Scout Cookie sales start and what did they sell?

According to the Girl Scouts website, the annual tradition of selling Girl Scout cookies started with a local bake sale. In 1917, just five years after Juliette Gordon Low founded Girl Scouts, the Mistletoe troop in Muskogee, Oklahoma held a bake sale in their high school cafeteria as a service project. The idea took off.

In her article, Neil estimated that the cost for producing six or seven dozen cookies using her recipe was 26-36 cents. She recommended that troops sell them for 25-30 cents a dozen. Throughout the 1920s, troops would bake her simple sugar cookies, package them by the dozen in wax paper bags sealed with a sticker, and sell them door-to-door for 25-35 cents a bag.

You can find her original recipe here, in case you’d like to bake up a batch yourself. 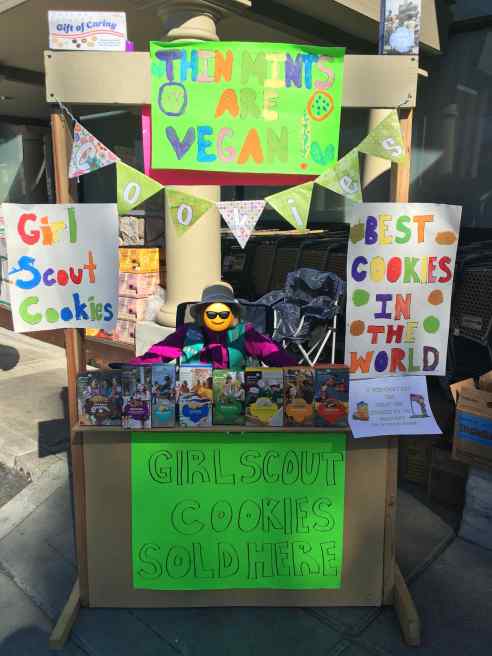 The local Boy Scout troop made this booth for their neighborhood Girl Scouts to use in their cookie sales. Thanks, guys! (Photo: Shala Howell)

When did Thin Mints come into the picture?

Thin Mints didn’t come on the scene until the Girl Scouts had shifted away from a business model that required troops to bake their cookies at home. In 1934, the Greater Philadelphia troop became the first troop to sell commercially produced cookies.

In 1935, the Girl Scouts of Greater New York joined them, but raised the stakes by purchasing a trefoil-shaped die for the cookies and printing the words “Girl Scout cookies” right on the box.

Butter, sugar, and flour shortages put a temporary halt to cookie sales during World War II (Girl Scouts sold calendars instead). Sales came back with a vengeance after the war ended. Twenty-nine different bakers around the nation held licenses to produce Girl Scout Cookies in 1948.

So, were Thin Mints really the third type of Girl Scout cookie ever introduced?

That depends on how you count. They were the third type of commercially produced cookie, yes, but if you include those early bake-at-home years, Thin Mints could have been more like the fourth or fifth or maybe the fiftieth. After all, it’s not hard to imagine that local troops might have offered more than one type of bake-at-home cookies in those early, unregulated cookie sale years.

You can learn more about the history of Girl Scout cookie sales here.