My Sister the Vampire #2: Fangtastic! by Sienna Mercer

What Fangtastic! is about 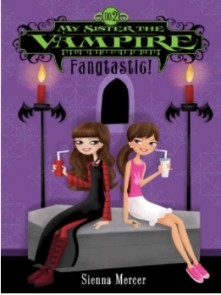 Olivia’s long-lost twin sister, Ivy, has finally returned. Bit of a twist–Ivy’s a vampire. You’d think this would be a problem for Olivia, who is herself a vegetarian. But no, ever since Ivy’s been back, Olivia can’t get enough of her sister’s stories about her vampire life. Trouble is, gossip reporter Serena Star wants to know all about Ivy’s life as a vampire, too. And this is one secret that definitely needs to stay hidden.

Why The Ten-Year-Old likes it

“Perfect for early morning or late night reading. It’s not scary, except for the creepy reporter lady, and has a ton of hilarious jokes in it. It makes you think a lot about the characters, too.”

Who would enjoy this book, according to The Ten-Year-Old

“If you are anything like me and enjoy the not-too-scary, semi-horror genre, you will like this book.”

What Project Terra is about 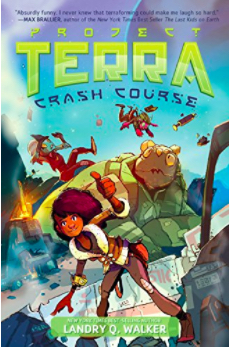 Elara Adele Vaughn is dead set on becoming the galaxy’s top planetary designer. So what if she comes from a planet so far away it’s literally called Nowhere? So what if her roommate is a mute, intergalactic sponge? Elara has everything she needs to survive her first year at the Seven Systems School of Terraforming Sciences and Arts — skills, talent, and the resourcefulness to avoid getting trapped in the belly of a monster on her school’s first field trip. Now, if only she can survive her first year at the galaxy’s top terraforming school.

Why The Ten-Year-Old likes it

“It’s hilarious, especially the part about the giant sponge. I can’t wait to read the rest of the series to see what the author does with that character.”

Who would enjoy this book, according to The Ten-Year-Old

“This book is insanely awesome and great for fans of sci-fi and Star Wars.”