Thanks for sticking with me through my potato obsession. The good news is I’ve only got one question about potatoes left, and it’s a short one.

How did Yukon Gold potatoes get their name?

Eh, not exactly. At least not directly.

Turns out the Yukon Gold potato wasn’t even around for the Klondike Gold Rush. A plant biologist named Gary Johnston developed it during the 1960s and 1970s by crossing a white potato from North Dakota called the Norgleam with a wild yellow-fleshed potato from South America.

When the new potato was finally ready to market in 1980, Gary Johnston named his hybrid the “Yukon” after the region where the gold rush had taken place. His associate, Charlie Bishop, suggested that they add the word “Gold” to remind consumers of its yellow flesh. The Yukon Gold was the first Canadian-bred potato to be marketed and distributed by name.

Now, if you’ll excuse me, I would like to resume a normal relationship with the potato. You know, the sort of relationship in which I think about potatoes only in terms of how many I will need to mash up to feed everyone at Thanksgiving dinner. 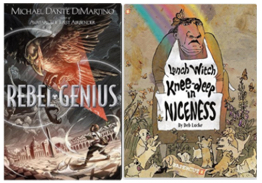 The Nine-Year-Old and I accidentally started our weekend early last week, and I failed to post an update on her reading habits. So I poked through her backpack debris field this morning and discovered that she’s reading Rebel Genius by Michael Dante DiMartino and Lunch Witch Knee-deep in Niceness by Deb Lucke.

No word yet on whether she likes them or not. When I asked, she said she hadn’t read enough yet to tell.