About two years ago, I slipped a note into The Nine-Year-Old’s lunch box. It was one of those preprinted affairs with a sweet little message on the front that said something like “Choose to be happy today,” and a bit of trivia on the back that read:

“Did you know? Potatoes were once so valued for their Vitamin C content that miners traded them for gold.”

I know the exact wording of this particular bit of trivia because it seemed both plausible and unlikely, so I took a picture of the card so that I would remember it long enough to check its accuracy.

Two years later, today’s the day. Let’s start breaking this question down so that we can figure out whether it can possibly be true.

What kind of miner would have paid for things in gold?

Nearly every TV show I’ve ever watched set during a Gold Rush includes a scene in which a ragged prospector watches anxiously while the shopkeeper weighs gold dust in a pair of scales to see whether he (or rarely she) has brought in enough gold to pay for the supplies he needs to keep digging.

Scenes remarkably like the 1899 photograph of miners purchasing supplies with gold dust during the Klondike Gold Rush at the top of this post.

How many gold rushes were there anyway?

Although the two gold rushes that come to my mind are the California Gold Rush of 1848-49 and the Klondike Gold Rush of 1896-99, gold rushes have taken place periodically all over the world for centuries. I was somewhat chagrined to find that Wikipedia’s Gold Rush page lists 64 of them, dating back to the Brazilian Gold Rush of 1695. Gold rushes appear to have happened on every continent except Antarctica.

I was going to have to narrow the list down a bit.

Which miners would have been most likely to barter gold for supplies?

I decided to rule out the gold rushes from the 1970s, 1980s, and 2000s on the grounds that “once” implied that the gold rush in question happened before my lifetime. Also, because most modern miners are paid in actual money, not the product they mine (at least in the U.S. and Canada).

I was going to have to do better.

Which of the remaining gold rushes would have had potatoes around?

Sadly, the answer to this appears to be almost all of them. The Inca Indians in Peru first cultivated potatoes around 8000 – 5000 B.C. When the Spanish Conquistadors invaded Peru in 1536, they developed a passion for potatoes, and carried them back to Spain. From there, the potato began to make its way across Europe, and from Europe, to the rest of the world.

The French more or less resisted the potato valiantly for more than two centuries, banning it from the tables of the wealthy until 1780 on the grounds that eating this ugly little tuber caused leprosy. Colonists in Massachusetts considered the potato to be the spoor of witches. Russian peasants called them Devil’s Apples and refused to plant them. None of these rejections really mattered though, as there were no gold rushes in France, Massachusetts, or Russia on my list.

The Scottish rejection of potatoes looked promising, though. Devout Scotch Presbyterians originally refused to give the poor potato room in their fields because potatoes don’t appear anywhere in the Bible. Still, the Scots seem to have come around by the time of the Highland Potato Famine of 1846-1856, which was devastating in part because the Scots had come to rely so heavily on the potato for their daily diet.  The potato famine had ended by the time of the 1869 Kildonnan Gold Rush in Sutherland, Scotland, making it unlikely that Scottish gold miners would have parted with a potato’s weight in gold just for the chance of dining on one.

Back to researching the great potato migration.

With the exception of the British colonists in Massachusetts, the British seem to have adored the potato and carried it with them nearly every place they went. They brought it to China in 1609, the U.S. in 1719, and Australia in the late 1700s. Given this trend, I assume they introduced it to their Canadian colonies as well in the mid-1700s.  Which means the potato could already have been a staple crop by the time of the 1799 Carolina Gold Rush in what is now North Carolina, the 1850 Queen Charlotte Gold Rush in British Columbia, and Australia’s Victorian Gold Rush in the 1850s, and by implication, all of the gold rushes that happened in North America and Australia thereafter. 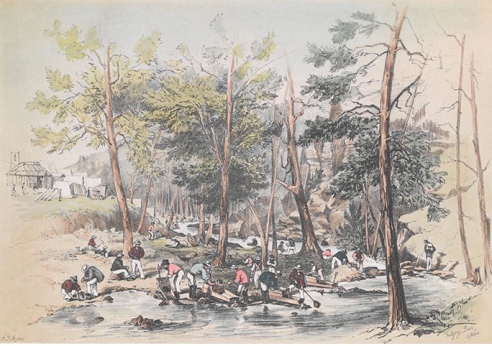 Panning for gold in the Australian Gold Rush of 1851 (Print from drawing by George French Angas. National Library of Australia.)

My gold rush list included several rushes that took place in Africa, starting with the Pilgrim’s Rest Rush in South Africa in 1873. As far as I can tell, the Dutch brought the potato to South Africa when they first starting sailing there in the 1600s. So it very likely would have been established by the time the various South African gold rushes got under way.

The other African gold rush on my list took place at Kakamega, Kenya in 1932. The British brought potatoes to East Africa in the late 1880s, so they presumably would have been available for the Kenyan miners to snack on as well.

Interestingly, large-scale potato cultivation in Brazil is a relatively recent phenomenon. Potatoes were strictly a garden vegetable until the late 1800s, when European immigrants arrived, bringing mass cultivation of the potato with them. Which meant that I could probably fairly safely rule out the Brazilian Gold Rush of 1695. Finally.

Clearly, tracing the history of potato cultivation wasn’t a very efficient way of narrowing down which Gold Rush that trivia card had been talking about.

I was just about to give up on this approach entirely when I came across this quote on Encyclopedia.com’s Potato facts page:

“During the Alaskan Klondike gold rush (1897–1898), potatoes were at times almost worth their weight in gold, so valued for their vitamin C that desperate miners traded gold for them.”

Now all I needed to know was whether or not miners in the Alaskan Klondike Gold Rush would have known about Vitamin C.

So, when was Vitamin C discovered? 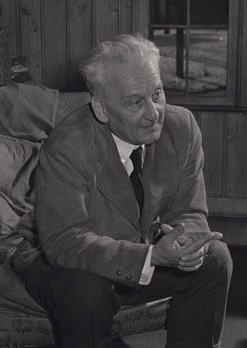 Albert Szent-Gyorgyi, whose discovery of Vitamin C in the 1930s came too late to be of any interest to miners in the Klondike Gold Rush of 1898. (Photo courtesy of the National Institutes of Health)

Curses and foul language, as The Nine-Year-Old would say. After all that work, this little scrap of trivia was at best only partly true.

Still, curious minds want to know: If potatoes weren’t prized for their Vitamin C, then why on earth were the Klondike Gold Rush miners so very desperate to get them?

Question for next week, I think.

4 Responses to ““Were potatoes ever so valuable that miners paid for them with gold?””