Welcome back to Caterpickles!

As we learned last week, miners during the Klondike Gold Rush in 1896-1899 valued the scurvy-fighting power of the humble potato so highly they were willing to pay $25 per bushel for them.

After politely listening to my explanation of why miners were willing to part with 1.21 oz of gold dust for a mere 50 lbs of potatoes, Daddyo calmly pointed out that the cure for scurvy would have been known for almost a century by that time. “The first medical trial ever was on scurvy back in the mid-1700s. Wouldn’t the folks in the California Gold Rush of 1848-55 also have known how to prevent it?”

Why didn’t the miners during the California Gold Rush realize eating potatoes could prevent scurvy?

Scurvy decimated the mining camps during the California Gold Rush. By some estimates, as many as 10,000 miners died of a disease for which the cure should have been well-known. After all, the British Navy had been giving their sailors lemon juice to prevent scurvy since the mid-1700s.

Oddly, relatively few people connected the lack of fresh fruits and vegetables in their diet with the scurvy outbreaks. In a 1857 letter to the editor which he wrote to a New Orleans journal — the only medical article written about scurvy at the time — Dr. Thomas Logan, who had gone to seek his fortune in the gold fields, speculated that miners got scurvy from eating spoiled food. 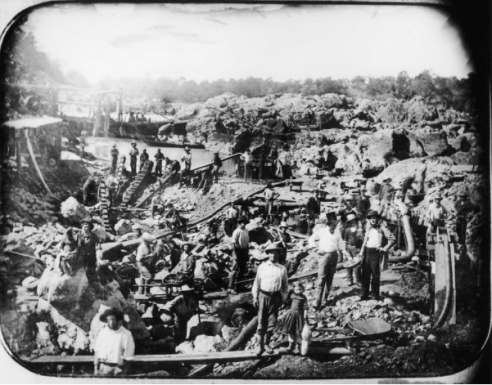 Although scurvy itself has remained a fairly constant and severe problem throughout the centuries, the knowledge of how to cure it somehow didn’t stick. Turns out that the mid-1800s when the California Gold Rush took place was one of those times when the cure for scurvy was in dispute.

Scottish physician James Lind proved back in 1747 that citrus fruits effectively cured scurvy, but his findings had come into question by the mid-19th century.

While Lind’s experiment showed that fresh citrus prevented and even cured scurvy, no one really understood why. 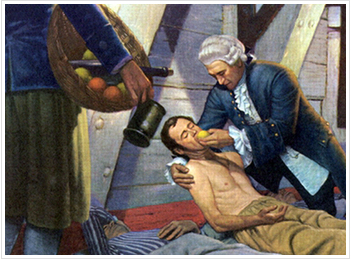 James Lind treating a sailor for scurvy in the mid-1700s. (Photo via What is Epidemiology?)

There’s a great explanation of the history of scurvy treatment and why Lind’s citrus cure came under such suspicion at the blog Idle Words. I encourage you to read it.

But for our purposes here, it’s enough to know that no one even knew about Vitamin C yet, much less that the lack of it was what actually caused scurvy. All people really knew was that when sailors in the British Navy were served lemon juice in their grog they rarely got scurvy. For many years, that simple approach worked beautifully. But when the British Navy swapped in lime juice for lemon juice in 1860 on the grounds that all citrus fruits were more or less the same, the treatment started to fail.

This is where the lack of knowledge comes in. Because Vitamin C hadn’t been discovered yet (and wouldn’t be until the 1930s), there was no way to know that Vitamin C occurs at different rates in different foods. Fresh lemon juice contains nearly four times the scurvy-fighting Vitamin C of fresh lime juice, for example.

Nor was there any way to know that Vitamin C breaks down quickly in foods that are cooked, preserved, or stored in containers exposed to light. As a result, the preserved lime juice sold as a countermeasure for scurvy often had no effect at all.

Finally, it wasn’t always clear that the change in their diet from a more varied fruit and vegetable rich cuisine to the extremely limited beans, bacon, coffee, and flapjacks favored by miners was the reason miners eventually ended up developing scurvy.*

If you had lived in a time when a tried and true measure for countering scurvy suddenly seemed to be failing for no discernible reason, would you have spent your hard-earned gold dust on it?

*Update 16 December 2020: A previous version of this post included the claim that the body could store Vitamin C for up to six months at a time. This is false. The body can neither produce nor store Vitamin C. I’ve deleted the false information from this post. Thanks, Chad, for alerting me to the error.

6 Responses to ““Why didn’t miners during the California Gold Rush realize eating potatoes could prevent scurvy?””