A week or two ago, I finally got around to telling The (now) Nine-Year-Old the answer to the question her Four-Year-Old self had asked about the rules for when Y was used as a consonant, not a vowel. She listened politely until I got to my list of examples.

Mommyo, didactically: “Y is not a vowel when it’s the first letter in a word or syllable. So for example, Y is a consonant, not a vowel, in words like yogurt.”

The questors in Robin Hobbs’ Assassin’s Quest use a yurt as they travel through the mountains.

The Nine-Year-Old, excitedly: “Or yellow.”

The Nine-Year-Old, disbelievingly: “You made that up. There’s no such thing as a yurt.”

Mommyo, assertively: “Sure there is. There’s a yurt in the book I’m reading right now.”

The Nine-Year-Old, knowledgeably: “You know, Mommyo, you can’t believe everything you read in books. Sometimes writers make things up.”

Mommyo, definitively: “Yurts are not made up.”

The Nine-Year-Old, challengingly: “Prove it. What’s a yurt?”

Yurts, I told the The Nine-Year-Old triumphantly, are a circular, portable tent, traditionally made of fabrics or animal skins. Nomadic tribes in Asia favored them because yurts are built on a collapsible framework that could be taken down, transported, and popped up again in another location fairly easily.

The Nine-Year-Old: “I’m going to need to see a picture of that.”

So I showed her the illustration from the Merriam Webster website:

The Nine-Year-Old, suspiciously: “A real picture, Mommyo. Somebody could have just drawn that.”

So I tried again and found a picture of a yurt by a lake (the picture at the top of this post).

In Googling for images of yurts to show the The Nine-Year-Old, I discovered that my definition needed a bit of updating. 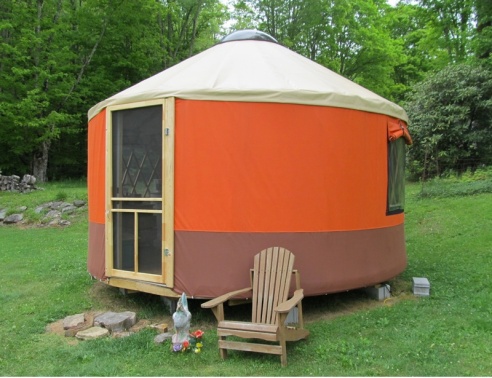 But yurts are clearly no longer exclusively for nomads and campers. Yurts are becoming quite popular as an alternative solution for affordable permanent housing in the Pacific Northwest, Colorado, and Hawaii — really pretty much anywhere high housing costs create the need for affordable housing.

Take a look at this 30 foot yurt from Pacific Yurts, Inc. Looks pretty permanent to me. 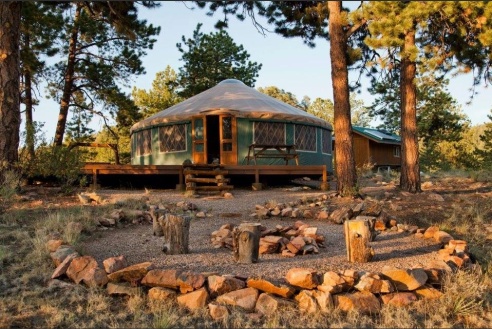 Inside, residential yurts often feature hardwood floors and furnishings that don’t look like the sort of thing you’d strap to a pack animal’s back for transport. Consider the kitchen on this one: 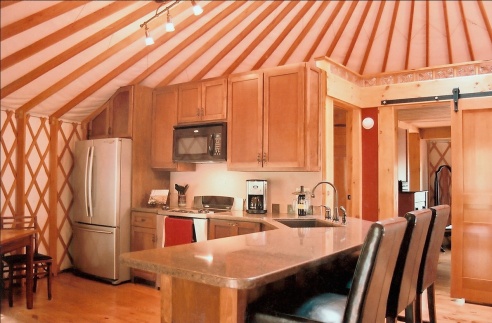 Or the interior on this one:

Lofts are a popular option in residential yurts. And is that a cupboard under the stairs? (Photo: Fortress Yurts)

Not built in a day. Not meant to only last for one either. Which explains bathrooms like this: 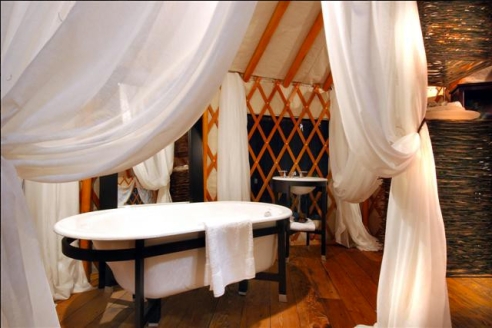 Yurts can even feature indoor plumbing. Fancy that. (Photo: Yurts by Design)

Melissa Fletcher of Yurts of Hawaii, which helps prospective buyers design and assemble their yurt homes, says that yurts are both solid and durable. With the proper maintenance (and a reputable builder), yurts can last for decades. Every 20 years or so, you will need to replace the roof and the walls of your yurt, but your basic infrastructure — the plumbing, electricity, gas, and the rest of the interior — will last longer.

I kind of want to live in a yurt now. Have any of you lived in a yurt? What’s it like?