I don’t know about you, but I’ve been fielding a lot of Santa questions lately. This one’s been coming up a lot, so even though I answered it last year, I thought I’d pull it from the archives–revised and updated for 2012–in case you’re getting hit with it at home.

How old is Santa?

That depends on who you think Santa Claus is. Let’s examine the candidates, shall we?

Also known as Nikolaos the Wonder-worker, Saint Nicholas was the 4th Century Greek Bishop of Myra who had a penchant for dropping coins in the clogs of the poor and who came to be known to the Dutch as Sinterklaas. St. Nick was born in 270 A.D., which would make Santa Claus 1741 years old.

If you think Saint Nicholas is Santa, then Santa Claus would be 1742 years old.

The Five-Year-Old: “You’d better fix the rest of the ages too.”

Next up in our pageant is Father Christmas, whose preferred means of travel appears to have been by goat, not reindeer-pulled sleigh. Father Christmas was first mentioned in 15th C British Christmas carols, which would make him roughly 600 years old.

As Americans are prone to do, when the British and Dutch Sinterklaas came to the United States, we couldn’t quite get the pronunciation of his name right, so changed it to something a bit easier, like Santa Claus. The name Santa Claus was first used in the American press in 1773, making him a relatively spry 239.

As Gaute Einevoll points out, Albert Einstein bears a striking resemblance to the man in red. More importantly, Einstein has the in-depth knowledge of moving matter required to deliver all those presents on time. Einstein was born on March 14, 1879, so if you subscribe to Einevoll’s “Quanta Claus” theory, then Santa Claus would have turned 133 this year.

Every winter, Odin would lead a great Yule hunting party through the sky on his eight-legged horse, Sleipnir. Children would set boots filled with carrots, straw, or sugar by their chimneys as snacks for Odin’s horse. Odin would reward the children for their kindness by filling the boots with candy and gifts. If Odin is the original Santa Claus, that would make Santa very old indeed. Too old for us to count, I’m afraid.

The Five-Year-Old: “What about Kris Kringle?”

Mommyo: “Yes, what is the story on Kris Kringle?”

The Five-Year-Old: “You should ask Caterpickles!”

The Story on Kris Kringle

Thanks in large part to movies like 1934’s Miracle on 34th Street, we in the United States often consider Kris Kringle to be just another name for Santa Claus, but traditionally the two figure are completely separate. The name “Kris Kringle” is another example of the traditional name being Americanized when it crossed our borders (and as it turns out, the original story being completely lost). 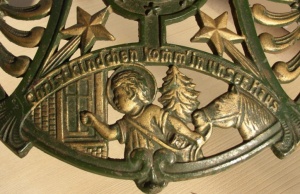 The Christkindl. Not Santa. (Photo: Square87 via Wikipedia)

Ironically, Martin Luther invented the original gift-giver, the “Christkindl” (also known as the “Christkindchen” or “Christkind”) during the 16th and 17th Century Protestant Reformation specifically to counter the growing popularity of St. Nicholas.

The Christkindl became the traditional gift-giver across Europe, parts of Hispanic America, and the Acadiana region of Louisiana. Although Luther intended the Christkindl to be a reference to the baby Jesus, over time the Christkindl sprouted angel’s wings and blond hair, becoming much more like a generous little 400-500 year-old cherub than an infant born in Bethlehem.

So how old is Santa?

Although the Miracle on 34th Street makes a compelling case for Kris Kringle being Santa Claus, we are going to side with Martin Luther and declare that the Christkindl cannot be Santa.

Which leaves us with St. Nicholas, Father Christmas, Santa Claus, Einstein, and Odin as the most likely Santa contenders. Depending on which theory you subscribe to, the perennially 70ish in appearance Santa Claus could be anywhere from 133 to Too-Old-For-Us-To-Count.

The Five-Year-Old: “Mommyo, how old do you think Santa is?”

The Five-Year-Old: “I’ll ask Santa. And then I’ll ask him if he reads Caterpickles.”

2 Responses to “Semi-Classic Caterpickles: “How old is Santa?””