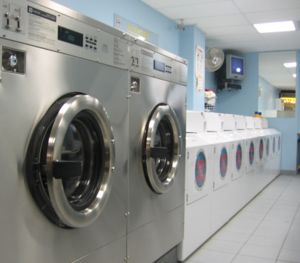 Consequently, every four weeks or so we will run out of something, most often sheets and towels, but occasionally when the spiders are particularly active, more essential bits of clothing as well. When this happens, my husband will declare a laundry emergency, and we’ll pack up everything and lug it down to the local laundromat for a targeted assist.

A recent episode of Word World (The Four-Year-Old’s favorite show at the moment) showed the crew of Word World changing the meaning of words by shoving two words together to create a compound word with a different, but related meaning. (“Mail” and “box” became “mailbox”, a box for mail; and “sand” and “box” became “sandbox”, a box for sand–you get the picture.) This episode was clearly running through my daughter’s head during our latest laundry emergency. With the typical literalism of a Four-Year-Old, my daughter wanted to know why these rules didn’t also apply to laundromat.

Mommyo: “Because it’s a place to do laundry and not a rug to stand on while folding clothes.”

The Four-Year-Old: “So why did they named it after a mat?”

The Four-Year-Old: “What’s it named after then?”

What is a laundromat named after?

It turns out Westinghouse trademarked the term laundromat in 1943. The crack marketing team at Westinghouse most likely created the word laundromat by mashing together laundry and automat (a self-serve restaurant where patrons purchased food from walls of coin-operated vending machines rather than through waitstaff).

So where did people do their laundry before laundromats existed?

Before there were laundromats, there was simply the laundry. Until 1916, the word laundry referred to the place where one did the washing and to the act of washing, but not to the things one washed.

One Response to “Classic Caterpickles: “Why isn’t the laundromat a real mat for laundry?””