What with the need to turn The Five-Year-Old’s bike into an abstract version of a rocket ship for the 4th of July children’s parade and three separate photo shoots for upcoming installments of Through the Lens of The Five-Year-Old, it’s been a busy week here at Caterpickles Central. I’m looking forward to a lazy post-holiday weekend, planting a few hydrangeas with The Five-Year-Old while Daddyo cooks up a storm on the grill. 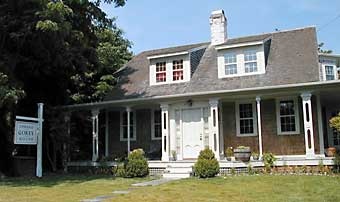 The Edward Gorey House at 8 Strawberry Lane in Yarmouth Port. Current exhibit: “The Envelope Art of Edward Gorey.” While you’re in Yarmouth Port, make time to stop by The Optimist Cafe at 134 Main Street (Route 6A) for breakfast, lunch, or high tea. (Or in our case, all three. Oh the sweet deliciousness.) You’ll be glad you did.

Local readers (and those planning a trip to Boston or Cape Cod this summer) will want to keep an eye on Highland Street’s Fun Free Fridays calendar. Every Friday from June 29 to August 31, the local non-profit offers free admission to all comers to area venues like Franklin Park Zoo in Dorchester, the Museum of Fine Arts in Boston, The Cape Cod Children’s Museum in Mashpee, Old Sturbridge Village, the Commonwealth Shakespeare Company and The Edward Gorey House in Yarmouth Port. The catch? Free Fun Fridays are extremely popular, so you’ll need to call your venue of choice and reserve your ticket in advance.  And while admission is free for your group, parking is not. 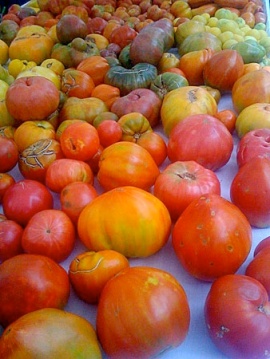 Uniform ripening and other reasons your loved ones hate tomatoes

From our correspondent in San Antonio comes word of an NPR expose on how good tomatoes have gone bad. Basically, the uniform ripening gene that eradicated the green shoulders on those lovely all-red store-bought tomatoes is the same gene that eradicated all the flavor. Bottom line: Buy heirloom tomatoes from your local farmer’s market this summer (or grow your own). Their wild and wacky color schemes come hand-in-hand with much better flavor. If you can’t find heirloom tomatoes for a reasonable price in your area, look for tomatoes that are slightly off-color around the top. That discoloration means the tomato doesn’t have the uniform ripening gene, and so might have a bit more flavor than your average tomato. 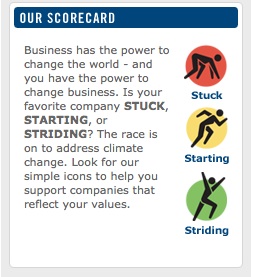 This week while idly reading the back of our empty Stonyfield Farm milk bottle, I learned about Climate Counts. Climate Counts is an effort to bring consumers and corporations together to battle climate change. The non-profit, sponsored in part by Stonyfield Farms (hence its appearance on my milk bottle), ranks corporations across various industries based on their progress in measuring and reducing their carbon footprint. Consumers concerned about global warming can use those rankings to steer their dollars to companies like Apple, Southwest Airlines, Ben & Jerry’s, and Kraft who have demonstrated a serious commitment to fighting global warming. To make their information as accessible as possible, Climate Counts has published online versions of their scorecard for both desktop and mobile users, a downloadable pocket guide, and created a free iPhone app (search for “Climate Counts” on iTunes). Thanks to a partnership with Mozes, consumers can also send a simple text to find a company’s climate score.

Well, that’s it for this week. I’ve got to grab The Five-Year-Old for a quick road trip to the Optimist Cafe before the weekend traffic jam starts.

One Response to “Free Fun Fridays! and other news of the week”