School’s out and we’d rather be outside. While that doesn’t mean we’ve stopped reading, it does mean I don’t want to spend a lot of time reviewing. Naturally, I feel guilty about that, so I’m going to experiment with giving you three quick hits on books that we’ve enjoyed over the years, rather than one long review.

The Five-Year-Old and her father love this book. I’m not as sold on it, mostly because The Five-Year-Old makes me skip all the scary bits. My thought is, if there’s bits that are too scary, the book needs to wait. On the other hand, The Five-Year-Old’s totally obsessed with all things cosmological, largely thanks to this book and its sequels. So there’s that.

Update: George’s Secret Key really does deserve a longer review. In the comments below, you’ll find a few more thoughts on this book, including why I wish I had waited to read it until The Five-Year-Old was a bit closer to the book’s recommended age of 8 and up. 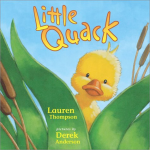 Super cute. The Five-Year-Old loves the pictures. A good book for kids who are just starting to learn to add, as it has some elementary math (1+1=2, 1+1+1=3, etc) built into the story line.

The Tale of the Flopsy Bunnies
By Beatrix Potter
Warne, 2002 (First published 1909)

You know, I remain somewhat surprised at the casual violence in these classic stories. In The Tale of Peter Rabbit, Mrs. Rabbit mentions that Mrs. McGregor put Peter’s dad into a pie. In the The Tale of the Flopsy Bunnies, Mrs. McGregor plans to skin the young Flopsies to make a coat. Both seem tame, though, when compared to The Fierce Bad Rabbit. I love these books, but every time I read them I am reminded that childhood is more sugar-coated now than it used to be.