Exposure times for photography in those days were extremely long, which had the perverse effect of making the dead daughter in this example the only reliably in-focus part of the image, while her (then) living parents appear blurred and more ghost-like. (Image via cogitz.com)

Earlier this week while doing some of the never-ending research for my novel-in-progress, Asylum, I came across memento mori, the Victorian practice of posing their dead for photographs. At first, I labeled this as just one more in a long line of somewhat creepy things Victorians did.

My goodness, these people not only pose their dead for professional portraits, in many cases the parents and even the surviving children hop into the picture too.

But is it really?

Some months ago we gave up cable TV. When The Five-Year-Old and I returned our DVR and remote to our erstwhile cable provider, The Five-Year-Old broke out into uncontrollable sobbing. The only way I could get her to relinquish the remote control was by agreeing to take a picture of it from every angle, “So I never forget it, Mommyo.” 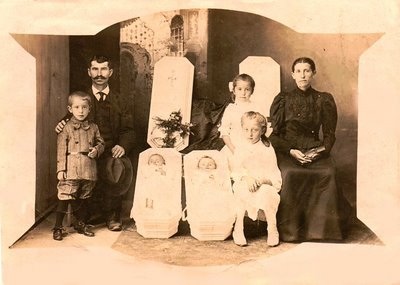 The mother’s expression is simply heartbreaking. (Image via cogitz.com)

Does The Five-Year-Old’s grief over the loss of cable compare to a mother’s grief over her dead child? Certainly not. And I hope I don’t sound like I’m trivializing the very real pain captured in the eyes of the survivors in these photographs when I say that I think The Five-Year-Old’s reaction–her need to have a photograph of her beloved remote control–comes from the same place. Once certain she would never forget her cherished lost object, The Five-Year-Old was able to begin processing her grief. Watching her do that helped me understand the Victorian mindset just a little bit better.

Once I opened my mind to their motivation, I came to realize that I am not so different from those Victorians after all. Again at the risk of sounding like I’m trivializing their pain, my seventeen-year-old cat died in March. I mention it not because I think my sorrow over Mulberry is in any way equal to the sorrow felt by the families of the loved ones memorialized in these photographs, but simply because Mulberry’s death is the most recent example of grief in my life and so the easiest one to think through in this context.

We are blessed to live in an age when photographs are inexpensive, quick, and easy to take. I have dozens (if not hundreds) of pictures of Mulberry taken over our years together.

Babies and young children were commonly posed as if sleeping. Although it was common to pose adults as if sleeping, many memento mori feature adults propped up in chairs or even standing as if still alive. (Image via cogitz.com)

If I ever were to feel in danger of forgetting Mulberry’s paint-brush black nose or the surprising white of her chest and paws, all I have to do is pull up a file on my computer, or flip through a photo album from the pre-digital age. I am in no danger of forgetting what Mulberry looked like, so I felt no need to document her death with a photograph.

But in the Victorian’s case, photography was new and relatively expensive. For many people, the memento mori would be the only photograph ever taken of them. And I can completely understand why a grieving mother, son, father, daughter, husband or wife would want to have a photograph of their beloved to console them in the long years after.