First let’s define our terms. Thanks to the power of the Roku + the Netflix, The Four-Year-Old has recently discovered the Busytown Mysteries, an animated Canadian children’s show based on characters created by Richard Scarry.

One afternoon, after spending a pleasant half-hour getting together again with Huckle, an orange tabby with a passion for solving everyday mysteries, The Four-Year-Old began reflecting on the realism of the show.

“Mommyo, do old warthogs look like Vanderbilt or Mr. Gronko?”

Although I have been unable to find photos of either the Warthog Vanderbilt or Mr. Gronko on the Intertubes, I can tell you, thanks to The Four-Year-Old’s superior information, that both are indeed characters on the Busytown Mysteries. Vanderbilt checks the weather in Busytown, while Mr. Gronko is “the biggest grump in Busytown.”

Further conversation elicited the key point. Using skills picked up from previous afternoons spent with Buddy (a five-year-old T. Rex on the Dinosaur Train), The Four-Year-Old had been busily comparing features between the two warthogs. Vanderbilt has two pairs of tusks, while Mr. Gronko has only one.

And that observation brings us to the The Four-Year-Old’s real question:

Do warthogs have one pair of tusks or only two?

Excuse me. The Four-Year-Old only cares about old warthogs. Young warthogs need not apply. 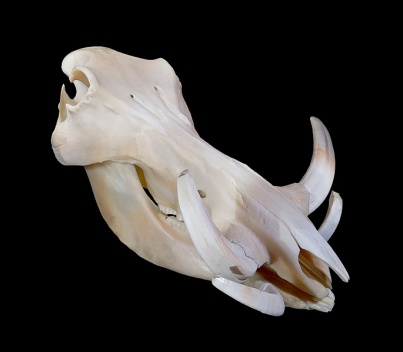 Skull of a male warthog. (Image by Didier Descouens via Wikipedia)

Preliminary results from asking the iPhone indicate that warthogs have two pairs of tusks, making Vanderbilt the more accurately drawn of the two.

I found a photo of a warthog on the National Geographic site who appears to only sport three tusks, instead of the regulation four. That implies that tusk-related mishaps can happen.

Mr. Gronko is widely acknowledged to be the biggest grump in Busytown. Could he be so testy because he’s already lost two of his original four tusks?

2 Responses to ““Do old warthogs look like Vanderbilt or Mr. Gronko?””