Another in our ongoing series: What We Did This Summer. 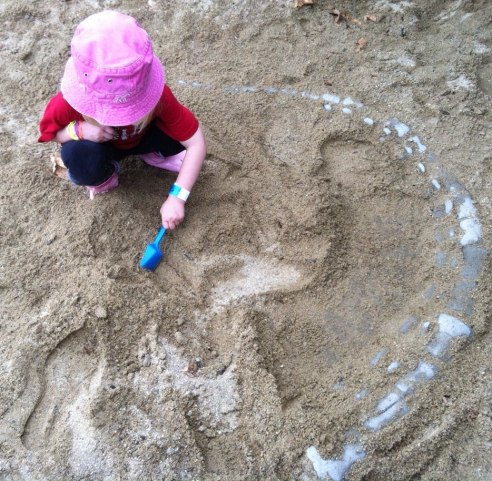 The Main Event (for us anyway), digging for dinosaur bones

At the beginning of the summer, my daughter asked me where she could go to dig for dinosaur bones. We had visited the tracks at the Nash Dinosaur Track Site and Rock Shop as well as the Dinosaur Footprints at Holyoke, MA last fall, and my daughter wasn’t interested in simply going to see more footprints. She wanted bones. And she wanted to dig up least two of them, so that she could keep one for herself and give the other to the Museum of Science.

A trip to the Hell Creek Formation just wasn’t in the cards for this summer, so when we heard that there was a dinosaur dig site at Davis Farmland, we packed up some provisions and trundled out there on a drizzly July day.

As you may be able to tell from the above picture, the dig was a success in that my daughter very quickly found a very satisfying set of bones. However, as you may also be able to tell, the bones are embedded in concrete slabs so that kids can find them over and over again. Which meant we couldn’t bring them home. That was a bit disappointing, but my daughter did find a seagull feather, which she declared to be clear evidence that the dinosaur she had found had had feathers, and fortunately for me, that discovery was exciting enough.

After an hour or so of meticulously brushing sand away from what turned out to be two different sets of dinosaur bones, my daughter was finally ready to try something new. 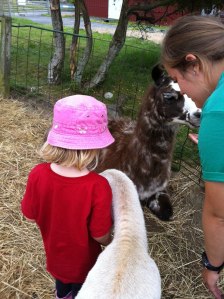 Hanging out with Snickers

And try something new she did. Over the next two hours, my daughter painted a log cabin with water; rode the pedal cars (aptly named goat carts); jumped and splashed in the Spray Park; played in a mini-village complete with animal clinic, farmhouse, and farmer’s market; scrambled for a seat on a hayride; and made the rounds of the sheep, goat, cattle, and pig enclosures.

Our only disappointment of the day happened at lunch. In their defense, it was nearly 2 o’clock when we finally got around to eating and the sandwich cafe was sold out of our first choice. And our second. And our third. We ate our fourth choice, and who is ever truly happy with that?

Still, they had ice cream.

Sadly, the ice cream was also disappointing–the kind that has more ice than cream. After a few bites, my daughter asked me to dump the ice cream in the trash, so that she could just eat the cone. Next time we go, our provisions are going to include a picnic lunch, not just snacks for the car.

The animal homes at Davis Farmland include an aviary, where you can find an albino peacock.

Meeting the baby goats in the petting zoo

The complex also includes the Davis Mega Maze, which opens August 4, and an apple picking orchard, which opens in September. 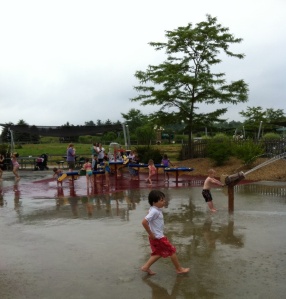 Part of the Spray Park at Davis Farmland

If the weather forecast sounds iffy, but Davis Farmland says they will be open when you call, get out there!

As my daughter pointed out on the drizzly day we went, “That’s what rain coats and rain boots are for.” And you will have the run of the park, because the weather report will frighten at least half of the regular guests away (this place is covered up in the summer).

What to take with you

A child under the age of 12. Unaccompanied adults are not allowed into the park. Properly chaperoned adults may also want to consider bringing hats, sunscreen, swimsuits, towels, and a picnic lunch.

So would we go again?

Absolutely. We’re planning a trip this fall when the apple picking starts up.

2 Responses to “In which we visit Davis Farmland in Sterling, MA”