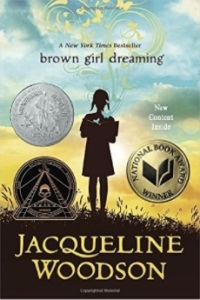 What the book’s about: The Nine-Year-Old read this book as part of her school’s Global Reading Challenge.

I think I may have mentioned this before, but in case I haven’t, for the Global Reading Challenge, the librarians at her school pick ten books that reflect a variety of American experiences. All of the fourth graders at the school divide up into teams. Each team member is assigned one or more books to become an expert on. They then read the books, take notes, and share what they’ve learned with their teammates.

At the end of the challenge, there’s a school-wide contest. The students write the questions for the contest themselves. Whichever team gets the most questions right wins. It’s kind of a big deal at her school.

The Nine-Year-Old was assigned two different books, El Deafo by Cece Bell and The Smell of Old Lady Perfume by Claudia Guadalupe Martinez, but read Brown Girl Dreaming anyway because she was intrigued by her teammate’s report on it.

Brown Girl Dreaming is a memoir written as a series of poems. In it, Jacqueline Woodson recounts what it was like to grow up as an African-American in the 1960s and 1970s in the midst of Jim Crow and the Civil Rights Movement. Woodson split her childhood between New York and South Carolina, but as her poems make clear, she never felt more than halfway at home in either place.

Why The Nine-Year-Old thinks you’ll like it: “I like that there was a lot of change, and that the story reads like it was someone’s real life.”

Women in Science by Rachel Ignotofsky

What the book’s about: Women in Science highlights the accomplishments of fifty remarkable women whose work in science, math, engineering, and technology changed the world. In this book you’ll find brief bios of women you’ve heard of, such as primatologist Jane Goodall, and several you haven’t, such as Katherine Johnson, the physicist and mathematician who calculated the trajectory of Apollo 11’s trip to the moon in 1969.

Why The Nine-Year-Old thinks you’ll like it: “I like that it tells the true stories of women in science that might not be told otherwise. Did you know that Mamie Phipps Clark figured out that segregation damages children? She put a white doll and a black doll that were exactly alike out for kids to play with and it became clear that black children identified with the black doll. But in segregated schools, the black children thought the black doll was ugly and bad, and that they themselves were ugly and bad.”

The Nine-Year-Old talked me into holding Isis the Science Snake yesterday. 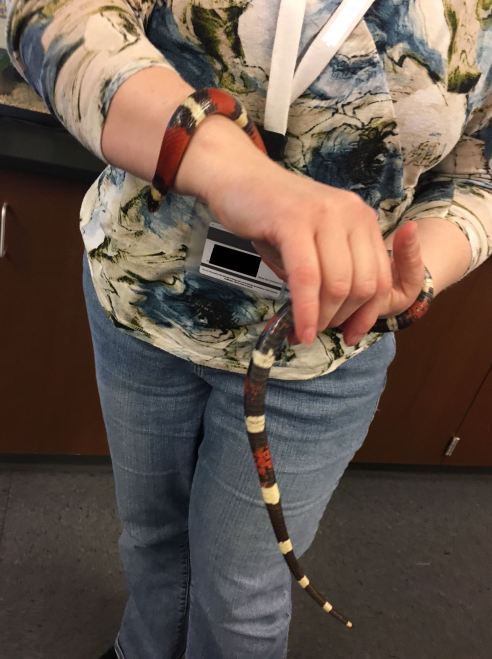 I asked her to take a picture of it so that I could prove I’d done it, and this is the result. You’ll have to take my word for it that this is really me.