You may remember that before Mommyo got distracted by the weird lyrics in Christmas carols, Daddyo’s mind had a question: “How can you tell the difference between a white weasel and an ermine?”

After I had explained to him about the differences in their size (ermines are bigger), belly fur (ermine belly fur is more yellowish than the white fur on a weasel belly), and tails (ermine tails are tipped with black), he was silent for a moment. But only for a moment:

I promised him I’d look it up just as soon as I’d figured out how you troll an ancient Yuletide carol. The Nine-Year-Old comes by her boundless curiosity honestly.

Is a mink a weasel?

No. Minks and weasels are completely different animals. However, they are related. Both are members of the mustelid animal family.

In the interest of staving off future questions along this vein from Daddyo, I’ll just note for the record now that the mustelid family tree also includes martens, fishers, ferrets, polecats, stoats/ermines, wolverines, and badgers.

How can you tell the difference between a mink and a weasel?

Size matters here. The feet will give you a hint as well, as will the type of land around you when you spot one of these guys in the wild. Let’s break it down.

Minks are larger than weasels. 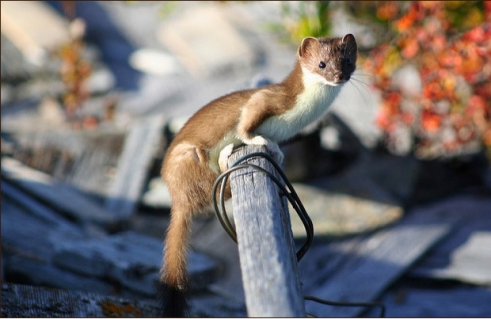 Ah, the poor weasel. It truly does seem to be the least of the Mustelidae. As we learned a few weeks ago, ermines are bigger than the American least weasel. Today we’re going to learn that minks are too. By quite a lot.

Male minks can weigh up to 3.5 pounds. The heaviest male weasels weigh in at just 16 ounces, but male weasels can weigh as little as 3 ounces. (The females of both species are smaller than their male counterparts. Female minks weigh just shy of 2 pounds, while female weasels edge the needle on the scale a mere 1-9 ounces.)

As you might expect from their greater weight, minks end up being about twice as long as weasels. Fully grown male minks are 20 to 3o inches long (tails included), while fully grown male weasels typically range from 10 to 16 inches long.

All that said, I still don’t have the skills to look at something in the wild and figure out by sight how long that skinny bundle of brown fur is, much less how much it weighs. I need a better reference point.

Fortunately one exists. It’s tempting to say here that you can tell them apart by the color of their fur. After all, minks are often solid brown, while weasels have a white belly. Minks also stay brown all year, while weasels in northern climates will turn white in the winter. Still, that may not be the best feature to rely on, as some minks do have white patches on their belly, and southern weasels don’t always turn white in winter.

We need something else, so let’s look at the feet.

I know what you’re thinking. “What if I can’t see its feet?”

Just look around you. What sort of habitat are you standing in?

Minks hunt in and around water. Weasels hunt on dry land. 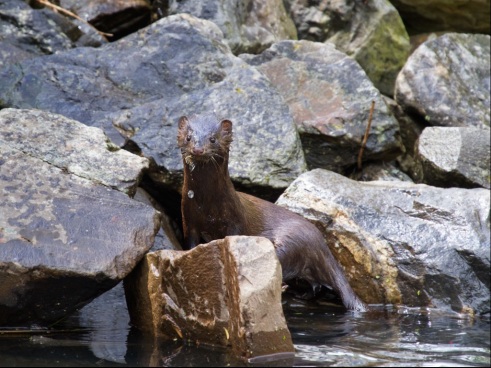 If you’re standing near a river, lake, stream, pond, or marsh, that skinny bundle of brown fur you just spotted is probably a mink. If that brown skinny furbody just slipped into the water to go swimming, it was almost definitely a mink chasing after its favorite food, the muskrat.

Weasels, on the other hand, hunt on dry land. Although they do need water to drink, weasels typically stick to woody or brushy areas and open fields. There they chase prey such as rabbits, moles, voles, and mice down the little tunnels that serve as the prey animals’ homes.