As you may remember from last week, The Nine-Year-Old and I have a working theory that Narmer and Charles Allen Cricket may have actually died from fright.

Our working theory is this: After listening to birds loudly planning to eat crickets for breakfast for an hour in the morning, the sight of Canelo’s gigantic furry paw armed with half-cricket-length claws caused first Charles Allen Cricket and then Narmer to experience a surge of octopamine (the cricket version of adrenaline) that flooded their system and caused their hearts to stop.

Naturally, when we shared this theory with Daddyo, he had his doubts.

Daddyo, unconvinced, “Do crickets even have hearts?”

As far as I can tell, the answer is a resounding sort of. I couldn’t actually find a definitive comment on cricket hearts that I trusted. But I did find this article on the internal organs of insects in general, by Debbie Hadley, Insect Expert for the About Education website.

Our circulatory system is a marvelous network of veins, arteries, and capillaries that funnels oxygen to our organs. Our lungs transfer the oxygen from the air we breathe into our bloodstream. Our hearts then pump that blood through our circulatory system throughout our body. (Daddyo is mumbling something over there on our Very Giant Red Reading Couch about microcirculation and the amazing miracle of the oxygen-hemoglobin dissociation curve, but that will have to wait for some other Caterpickles post.) 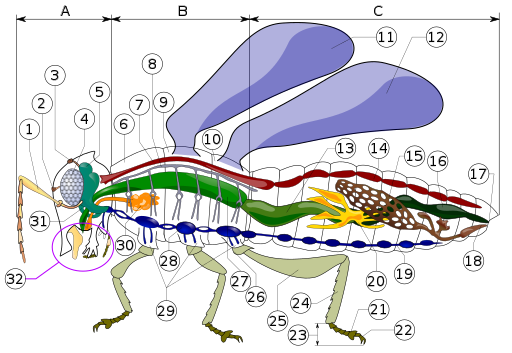 Anatomy of a generic insect. The red line (7) is the insect’s blood vessel, the chamber marked (14) is the portion of that blood vessel that serves as the insect’s heart. (Illustration courtesy of Piotr Jaworski, PioM, via Wikimedia Commons)

Insect circulatory systems are a bit different. There is no network of arteries and veins. Instead, insects have an open circulatory system. Their blood flows freely through their body cavities, making direct contact with all of their organs and tissues. The system isn’t completely blood vessel free, however. Insects have a single blood vessel that runs from their head to their abdomen (the red line in the above diagram), where it divides into chambers. This abdominal portion of the blood vessel functions as the insect’s heart.

Insect blood, called hemolymph, enters the insect heart through tiny holes in the heart wall. Muscle contractions then push the blood forward through the blood vessel toward the insect’s thorax and head.

So, if crickets have a heart, could an octopamine surge kill the cricket by stopping that heart?

In researching this question, I came across a fascinating paper by Paul Anthony Stevenson and Klaus Schildberger, in which they explore the links between aggressive behaviors in crickets and octopamine.

The paper confirmed for me that octopamine is transported throughout the cricket’s body courtesy of the hemolymph in the cricket’s open circulatory system. So far, it seems at least theoretically possible for the cricket’s heart to become flooded with octopamine.

The paper also clarified the function of octopamine a bit. In larger invertebrates, such as lobsters, octopamine works to suppress aggression, and serotonin increases it. If you want your lobster to pick a fight, inject him with serotonin. If you want him to stand down, give him octopamine.

But in crickets, it’s the other way around. Serotonin suppresses aggression, octopamine promotes it.

That said, crickets whose circulatory systems aren’t flooded with octopamine will still fight in response to intense antennal stimulation. That makes researchers like Stevenson and Schildberger think that the role of octopamine may be a bit more nuanced. Instead of being the trigger for aggression, octopamine may be the reward for it.

Whatever octopamine’s role in cricket aggression, Stevenson and Schildberger’s research shows that crickets who have recently flown, won a fight, or successfully acquired a cozy little burrow to call their own, all experience heightened levels of octopamine. And with that comes an increased tendency to engage in the next battle. (Crickets who lose their battles, on the other hand, are more likely to behave submissively for the next few hours.)

Still, fascinating as this paper is, it doesn’t address the question of whether octopamine surges can be strong enough to actually stop a cricket’s heart. Nor could I find any publicly available research papers that addressed this specific question.

So for now, we’re going to have to add the question of whether or not crickets can die of fright to our official Caterpickles list of “Questions We Can’t Answer Yet.”

Anyone out there know?

One Response to ““Can crickets die of fright,” Part Two: “Do crickets have hearts?””