The second in Carol Weston’s Ava series sees Ava struggling with sharing her best friend’s attention with another girl in the fifth grade. Worse, the cat Ava adopts for her eleventh birthday doesn’t seem to like his new family all that much. Ava pours her feelings into a short story about Taco Cat. Her story wins her lots of praise, but all that attention leads to an unexpected disaster. How will Ava make things right for herself, her family, and her beloved Taco Cat?

This is a great story to read along with your nine-year-old. So much fodder for conversations about preserving friendships and taking care of pets, and how to make the painful choices those relationships sometimes require of us.

In this final edition of Angleberger’s Origami Yoda series, the kids from McQuarrie Middle School face their wackiest challenge yet: “Will Fruitigami Yoda be a match for Harvey’s sour, hate-filled pickle of darkness?”

I really need to start reading this series. 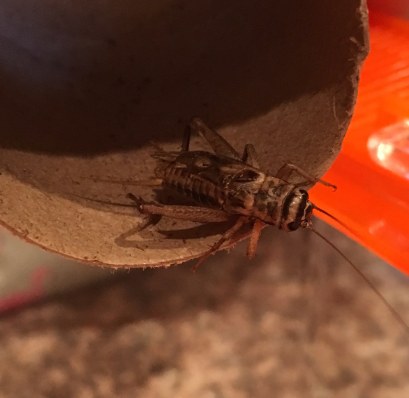 The cricket project is officially over. Charles Allen Cricket II made a break for it this past Wednesday, may he hop in peace, giving Debbie Davis Cricket yet another opportunity to demonstrate her superior survival skills. She remained alive and ensconced in the cricket habitat long enough for The Nine-Year-Old to return her to her science teacher this morning.

Turns out Debbie Davis Cricket is a house cricket, not a field cricket. Because they have adapted for life indoors, house crickets are typically raised as food for other pets like birds and reptiles, but they can also be kept as pets themselves. Field crickets, on the other hand, may come into houses temporarily to escape the cold, but they don’t thrive inside the way house crickets do.

As a house cricket, Debbie Davis Cricket does not belong free and in the wild. But since it doesn’t seem terribly healthy for Debbie to continue living in a house with a cricket-terrorizing cat either, The Nine-Year-Old took Debbie back to school this morning.