As you may have deduced from the title of this post, Daddyo and I introduced The Nine-Year-Old to Hugh Laurie and Stephen Fry’s Jeeves and Wooster TV series this weekend.

Although I had hoped she would enjoy it, until we sat down to watch it together, I had not appreciated how perfectly calibrated for nine-year-old humor Jeeves & Wooster is. The pranks are grade-school stuff — poking holes in people’s hot water bottles to wet their beds while they are sleeping, pushing other people into placid streams from which they emerge unscathed, and tricking a famous singer into singing the same song at a church fundraiser that five other people have already sung before her — all done in what (to The Nine-Year-Old at least) is the obviously worthy cause of keeping people from getting married. The cherry on top is that, so far, every episode has featured either a bevy of cats or a telegenic dog in a key role.

Which brings us to today’s question.

Why did Jeeves describe an orange tabby as a ‘lemon-colored animal?’

In the very first episode, the members of the Drones Club deposit three cats at Bertie Wooster’s flat for safe-keeping. One of the three was clearly an orange tabby, but Jeeves described it as a “lemon-colored animal,” which was confusing to all of us here at Caterpickles Central for obvious reasons.

“Wait. Did he just call me a lemon?” (Photo: Shala Howell)

This prompted all sorts of questions.

Mommyo: “Do you think it’s just a British thing? Maybe lemons in England are more orange than the ones we have here.”

Case in point: To me, at least, Meyer lemons look more orange than yellow.

Daddyo, looking askance at me over my suggestion that Meyer lemons are actually orange, not yellow: “I wonder if people are just genetically programmed to see some colors differently.” (Spoiler alert: Yes.)

And from The Nine-Year-Old:

“Are there really yellow cats?”

Well, that settled it. I had to ask Dr. Google.

In hindsight, I should not have been surprised at the wealth of extremely detailed information I discovered. After all, I was researching cats on the Internet.

As always, we can ignore much of what the Internet says about cats. For our purposes, this chart from Messy Beast pretty well covers things.

According to folks who study and judge pedigreed felines, there are no orange tabbies, only red ones of various pigments. The following chart shows the recognized color ranges for red tabbies. As you can see, as far as these excessively well-informed cat cognoscenti are concerned, the darker the red, the better bred the cat.

Colour and pattern chart for Red Tabbies via Sarah Hartwell at Messy Beast.

You may judge for yourself whether Jeeves was actually correct in referring to the animal that appeared on Jeeves and Wooster as ‘lemon-colored.’ We here at Caterpickles Central happen to think he was more of a marmalade. But no doubt Jeeves was making a sly commentary on the animal’s pedigree, not his coat.

And that leads us to what inquiring Nine-Year-Old minds here at Caterpickles Central really want to know:

Where does our cat fit on this spectrum?

I’m going to go with no.

So is he orange? 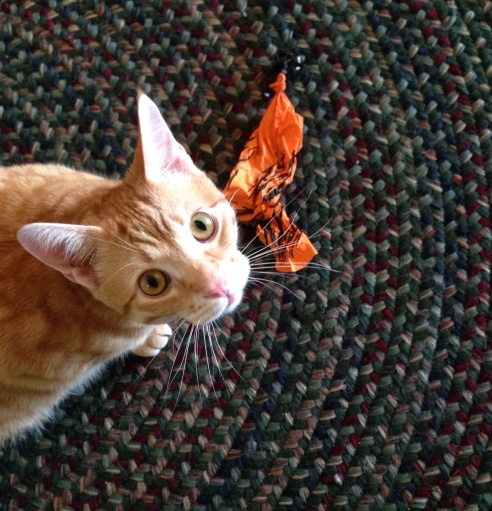 Canelo vs. the remains of an orange balloon. (Photo: Shala Howell)

Eh, maybe. He still looks a bit lighter to me.

Canelo in a basked of cream yarn. (Photo: Shala Howell)

OK. Definitely darker than cream. I think if Jeeves met Canelo, he’d probably refer to him as a “lemon-colored animal,” with all the snobby implications of washed-out alley cat genes that term implies for Pedigreed Cat Owners in the Know.

The Nine-Year-Old, firmly: “I don’t care, Mommyo. ‘Lemon-colored’ is a terrible way to talk about a cat. Canelo’s coat is more sand-and-cream anyway. Let’s describe him that way instead.”

Sounds good to me. What do those Internet people know anyway?