We’ve been having an unusually warm December. The Eight-Year-Old is a bit irritated by that, because she really wants what she calls a Mental Health Snow Day. On the other hand, it’s kept the bugs around longer than usual. And oh my goodness, is The Eight-Year-Old interested in bugs right now.

Most of the questions lately have had to do with ticks and tick avoidance. The Eight-Year-Old is working quite hard on a minor archaeological dig in the school courtyard, and is quite reasonably concerned about encountering one of those bloodsuckers. I’d think she’d be more concerned about encountering an irate school gardener, but this has been going on for weeks now and no one has called a halt to it.

Anyway, I was so used to fielding questions about butterflies, moths, and ticks (you know, garden variety bugs) that when The Eight-Year-Old asked me what a saddle bug was, I leapt to the obvious and told her that I thought it was a type of flea.

The Eight-Year-Old didn’t buy it. “But do you know it’s a flea, Mommyo? I mean, you’ve been wrong before.”

So when we got home, I did a quick Google search, squinting slightly to protect my brain from the onslaught of truly itchy pictures sure to follow.

“Google, what is a saddle bug?”

But Google was mystified. “Are you sure you didn’t mean saddle bags?” it asked me. Several times. Even after I confirmed that I had really meant saddle bugs.

Google has never heard of saddle bugs. It found lots of pictures of saddle bags and tons of questions about bugs in gaming software related to horses and their saddles, but saddle bugs, it told me firmly, just didn’t exist.*

So I went old school. I asked the OED. My analog copy of it, because the web version requires a subscription.

The Shorter OED had never heard of saddle bugs either.

They did mention a saddleback caterpillar, though. Apparently, it’s the caterpillar form of the North American moth Acharia stimulea.

The moth the saddleback caterpillar grows up into. (Photo: Lacy L Hyche, University of Auburn)

Although you can’t tell it from its adult form, the saddleback caterpillar is aptly named. Its back is festooned with a bright green patch and a brown saddle. 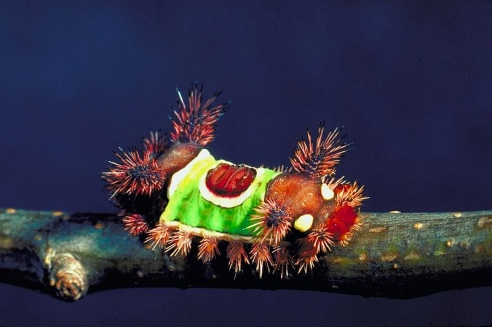 Those little tufts along its sides and on its face and tail look pretty fabulous as well. At least until you learn that the proper term for them is urticating hairs, and that they are for stinging, not petting. Stings from those fashion-forward tufts can cause severe irritation.

Turns out the saddleback caterpillar isn’t the only furry stinging caterpillar out there.  This compilation from the University of Kentucky College of Agriculture, Food and Environment lists several, including the oddly familiar looking Puss Caterpillar, the leafy looking Hag Moth caterpillar, and of course, our friend the saddleback.

In hindsight, the super fun and apparently harmless “Are caterpickles ticklish?” experiment that kicked off this entire blog venture four years ago seems like an uncommonly reckless thing to do with an impressionable Four-Year-Old. What was that Caterpickles lady thinking, anyway?

One Response to ““What are saddle bugs?””