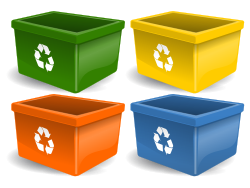 My daughter reveres Mr. Rogers. She comes by it honestly. So do I. He reminds me of my dad. No really. My dad looks just like him.

Anyway, recently my daughter saw several episodes in which Mr. Rogers discusses trash, the problem of trash, and what to do with things once you are done with them to minimize the environmental impact of trash. I forget the exact words he used, but they boil down to “Reuse if you can, recycle if possible, and only throw away if you must.”

Thanks, Mr. Rogers. My daughter is a total hoarder now.

My daughter takes Mr. Roger’s dictum very seriously. It’s gotten so bad that I have to sneak out the trash and recycling after she is in bed to avoid triggering a vehement “but I have a purpose for that” response.

She hoards cardboard boxes to decorate as dioramas, shoeboxes to use as mailboxes for her bevy of imaginary friends, stray feathers which she finds on the floor in craft stores (shhh!), even bits of sandpaper and steel wool left over from a certain mouse-proofing episode last fall, which do not seem to have a purpose yet, but are kept waiting for one in her treasure box.

The last time I tried to throw away her stash of toilet paper rolls, she talked me into making a Father’s Day gift with them instead.

I made a valiant attempt recently to keep her from hoarding the leftover tubes from used up rolls of toilet paper and paper towels. She insisted they were to be used to make a present for Father’s Day. It seemed highly unlikely to me that such scraps could be turned into something that anyone (even a doting father) would want, but “Ask the iPhone, Mommyo.”

I will allow you to imagine my chagrin (and my daughter’s glee) when my Google search immediately pulled up Parenting’s 7 Easy-to-Make Gifts for Father’s Day, which included this pen holder made of old toilet paper and paper towel tubes.

It was too complicated for my four-year-old to make, but no worries, “You can make it, Mommyo.” And so I did, using up a good bit of old wrapping paper, two of my daughter’s hoarded toilet paper tubes, the tube from some gift wrap ribbon, a piece of old rick rack that I inherited from my grandmother years and years ago, a bit of cardboard from a recently delivered package, and an embarrassingly copious quantity of glue. (Thankfully, Elmer’s really does dry clear. I just wish it also dried flat.)

One of the many very nice things about my daughter is that she has not yet learned the phrase “I told you so.” So when I finished the pen holder, she simply told me it was beautiful and ran off to her secret stash to find a crinkled gift bag and some used tissue paper to wrap it in.

My daughter, excitedly: “Daddyo can use this at work.”

6 Responses to “In which my daughter teaches me about upcycling”