As an only child, The Six-Year-Old is doted upon. I know, shocking, right?

One of the ways I dote on her is by tucking little notes in with her lunch. Last year, when The Six-Year-Old was just a kindergartener, I put a lot of effort into this, writing her little notes or drawing her a picture every day. This year I got lazy. Or maybe I discovered there was an easier way and then got lazy.

Whatever the case, this year I stocked up on Lunchbox Love Notes from Say Please. They have a positive message of some sort on the front (“I’m so proud of you,” “Be a good friend today,” “Say please”) and a bit of trivia or a joke on the back. Which means all I have to do to show The Six-Year-Old some love is draw a heart and sign my name.

Some days, I’m inspired to comment on the trivia in some way, which brings me to the subject of week’s post.

Last week, one of the cards talked about how banana slugs lose and regrow over 27,000 teeth in their lifetime. 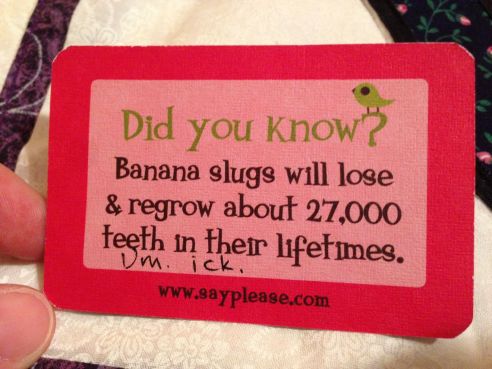 The Six-Year-Old’s mind had a question: “Where do banana slugs live?”

Daddyo had a response: “Where ever it is, I hope it’s far away from here.”

Sadly for Daddyo, it’s not quite as far as it used to be, now that Caterpickles Central has relocated to Chicago.*

Wikipedia tells me that you can find the extravagantly toothed banana slug along America’s Pacific coast from the redwood forests of California all the way up into southeastern Alaska. Most live in the coniferous rainforests along the coast, but isolated populations can be found along Doane Creek in the forested section of Palomar Mountain State Park and in the Sierra Nevada mountains north of Yosemite National Park. You can also find banana slugs lurking in the forest floors of the Columbian Mountains and in damp areas of Mount Revelstoke National Park in British Columbia.

*June 2019 Update: And now that we’re in California, we’ve run across a few banana slugs in the wild. Poor Daddyo.

2 Responses to ““Where do banana slugs live?””