Not the Six-Year-Old’s mouth. This photo comes courtesy of the blog Pediatric Dentistry.

Here’s what happened. Last week, the Six-Year-Old starting looking a bit shark-like. Her permanent teeth had started to come in on her bottom jaw, even though her baby teeth hadn’t started falling out, giving her two rows of teeth.

When I took her in to the dentist, he explained that this was very common. He called it over retained baby teeth, and said that the thing to do was to help convince those baby teeth to come out to make room for the very impatient permanent teeth coming in.

At first, The Six-Year-Old was all for it. Until she realized what the word “extraction” actually meant.

Things got a bit rough there for a bit, but with the help of the soundtrack from Lion King and a very skilled, patient, and kind pediatric dentist (Thank you, Dr. Moreno!) extracting the teeth ended up being a relatively quick and painless procedure.

The Six-Year-Old, heavily bribed with the promise of “All the popsicles you can eat up to 30”, rapidly recovered and was back to her normal bouncy self within a very few minutes of getting home.

She spent the rest of the day happily speculating about what exactly her buddies at school would say when they saw her.

There was a slight bobble at dinnertime, when she realized that the Tooth Fairy was going to come and take away her teeth overnight. That’s when the negotiating started.

The Six-Year-Old: “Mommyo, will the Tooth Fairy take both of my teeth?”

The Six-Year-Old, tentatively: “Do you think she might share just this once? I have two. We could each have one!”

Mommyo, helpfully: “Why don’t you write her a letter and ask?”

The Six-Year-Old, hopefully: “Do you think that would work?” 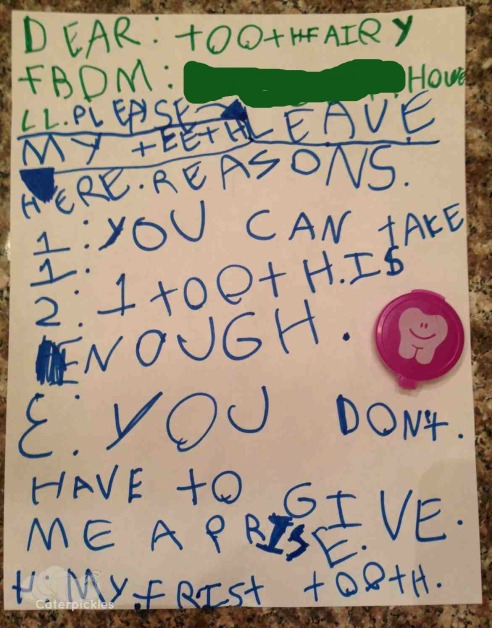 The Six-Year-Old’s letter to the Tooth Fairy. (Photo: Shala Howell)

Based on the hour at which The Six-Year-Old got out of bed this morning, having the Tooth Fairy come is even more exciting than a visit from Santa.

The Six-Year-Old, bounding into our room in the dark (no small feat in the Northeast in late spring): “Guess what guys! Exciting news! The Tooth Fairy came! She left me a tooth AND a dollar!”

Mommyo, gamefully: “A whole dollar! Wow, when I was a kid, I only got a dime.”

The Six-Year-Old, sympathetically: “That’s terrible, Mommyo. Did you ever try writing her a letter?”

2 Responses to “The Six-Year-Old Negotiates: Episode 2, The Tooth Fairy”