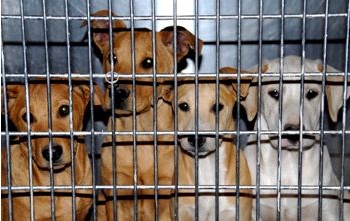 We’ve been talking about pets a lot here lately, but that’s just because we really want one. Although we’ve ruled out getting a dog for now, this Huffington Post story about the perils of purchasing a puppy online caught my eye.

”The Internet is the Wild West of puppy mills. It’s a 24-7 unmonitored, anonymous marketplace, the world’s largest marketplace. It’s very difficult to monitor and therefore easy for sellers to circumvent laws,’ Jeff Flocken, director of the IFAW office in Washington, told The Huffington Post.”

I don’t normally do rants, but this story really got under my skin.

Because of this, puppies from these mills often have serious health problems, which can lead to huge medical expenses and in some cases, premature death.

Imagine bringing a puppy home for your Five-Year-Old only to have it die a few days later.

Even when the puppies survive, animal welfare experts say that puppies from these mills can suffer permanent emotional damage from their extremely traumatic start in life.

If you are looking for a new puppy, I strongly encourage you to adopt or purchase your new family member from a local animal shelter, rescue group, or reputable breeder. Take the time to tour the facilities where the dogs are housed to ensure that the living conditions are humane and sanitary. 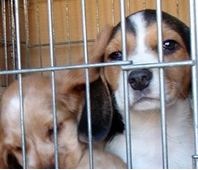 If you do decide to find a pet online, at the very least insist on picking up the puppy in person–and refuse to do business with anyone who won’t let you.

“A telltale sign, Flocken said, is if the seller will only ship the puppy or meet some place other than the kennel. ‘Never buy an animal unless you can see the facility in which it was raised,’ he said.”

According to the Huffington Post, the worst offenders are Animaroo, PuppyTrader, DogsNow, NextDayPets, and PuppyFind. More than 50% of the ads on those sites appear to be from puppy mills. Investigators thought that nearly 44% of the ads on TerrificPets were likely to be from mills as well.

The City of Los Angeles has entirely banned the sale of any animals other than rescue animals. After reading this story, I’m beginning to think that’s a very good thing. Of course, the LA ban doesn’t stop folks from buying their puppies online–and inadvertently keeping these puppy mills in business.