If you’re just joining us, recently The Five-Year-Old asked me how Americans used to make ketchup in those bleak days before Henry Heinz brought his ketchup to market in 1876. Yesterday we found and translated an old-timey recipe. Today we’re cooking it.

Step 3: Cut up the tomatoes and boil until tender.

Step 4: Strain through a wire mesh strainer to remove the skins and seeds.

Nowadays, people tell me that the easiest way to skin a tomato is to boil it briefly then plunge it in an ice-water bath before peeling. But in the days before refrigeration, ice had to be sourced from last winter’s snow fall or from the tops of mountains.  By the time the tomatoes ripened in August, ice was pretty darn scarce. So I imagine people would be far more likely to use whatever was left in the icehouse to make ice cream, and not waste it peeling tomatoes.

The recipe I’m using implies that cooks removed skins and seeds from tomatoes by boiling them until they were tender and straining them through a wire sieve. So that’s what I did.

Boy, was that tedious. Next time, I’m using ice and a food mill. (Food mills weren’t invented until 1933, but I only need to be historically semi-accurate once, right?) 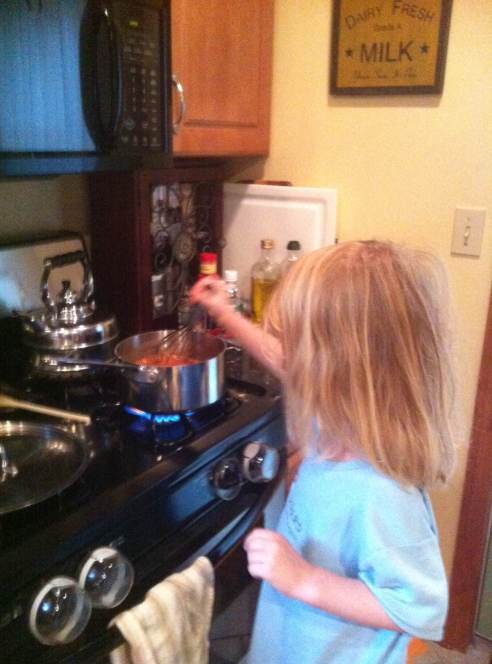 I popped in every once in a while to stir, but mostly left the catsup alone on a gas stove set to low.

After one hour. Smells and looks more like BBQ sauce than catsup. 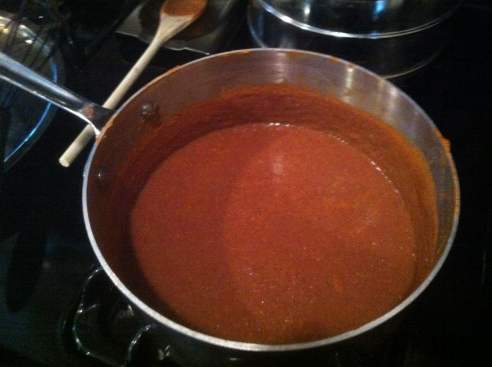 After 2 hours. Still pretty soupy, but getting thicker. 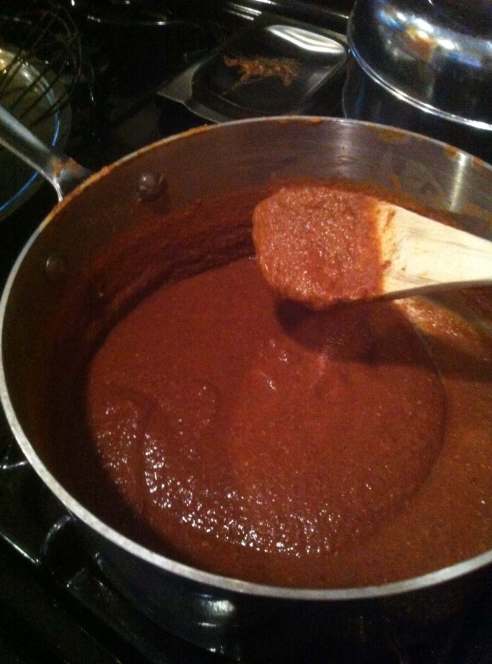 After three hours, it finally clings to the spoon.

I didn’t make enough to can, so I stuck the final product — all two cups of it — in an airtight glass container and put it in the fridge to wait for the official taste testing at dinner.

You’ll have to tune in tomorrow to see what The Five-Year-Old thought, as it’s press time and dinner hasn’t happened yet.

One Response to ““How did they make old-timey ketchup?” A Caterpickles Investigative Report, Part Two: The Cooking”