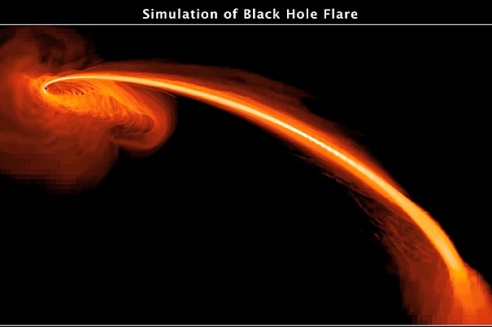 Computer simulated image of an astral flare caused by a black hole chowing down on a dying star. (Image: NASA, S. Gezari of JHU, and J. Guillochon of UC Santa Cruz)

Sorry about not doing a proper book review yesterday (for the curious, we’re reading The Borrowers Afloat by Mary Norton) but Gran’s response to The Five-Year-Old’s question about how imaginary time machines work got me thinking. There’s nothing like doing a little experimentation to really figure out the nuts and bolts of something, right? So on Wednesday, The Five-Year-Old and I began to convert an old cardboard box into an Imaginary Time Machine. We aren’t quite done with this all-engrossing project yet (the Mars Rover module is giving us a bit of trouble), but when we are, I’ll tell you all about it.

In the meantime, let’s talk about the news, shall we?

The Brutality of Eating

I don’t know what you’ve been reading lately, but this little essay about the basic brutality of eating caught my eye this week. Current discourse about the ethics of eating nearly always focuses on whether or not it’s morally acceptable to eat meat, or in the case of vegans, anything produced by a sentient being, words that for most of us translate to “animal.” But should they?

In a recent article for the New York Times, philosopher Michael Marder cites studies that indicate that pea plants are capable of a basic form of communication. Which leads to the question: “If peas can talk, should we eat them?” For me the answer remains a resounding yes. For my husband, well, he’ll be the first to tell you he never really liked peas anyway. Beatrice Marovich, the author of Eat, Pray, Kill, the article that started this whole rambly paragraph, views this question through a different lens. For her, the question is not whether it’s ever morally acceptable to eat meat or even peas, but rather, whatever our personal eating choices, how do we justify them to ourselves, and what role, if any, do religious and/or secular powers have to play in those decisions? It’s an interesting article, if you enjoy thinking about that sort of thing.

Speaking of eating, I learned this week, courtesy of the Harvard Gazette, that black holes are more selective snackers than I had thought. Instead of continuously sucking up everything around them, black holes remain relatively quiet for most of their lives, until a tasty morsel like a dying red giant comes their way. Only then do they have a delightful binge. At least, that’s what Ryan Chornock of the Harvard-Smithsonian Center for Astrophysics(CfA) and his colleagues, including team leader Suvi Gezari of Johns Hopkins University say. And really, they should know. After all, they’ve spent the last year watching a supermassive black hole consume a dying star. (The picture at the top of this post shows this process in action.)

Leave a Reply to Eat, Pray, Kill | The Basic Brutality of Eating « The Age of Blasphemy Cancel reply