I hate brushing my daughter’s hair. I’m not alone in this. My daughter hates it when I brush her hair too. Sadly, The Five-Year-Old’s hair is super-fine and extra tangle-ly, which means that every morning we have to deal with a major case of bed head before packing her off to preschool. 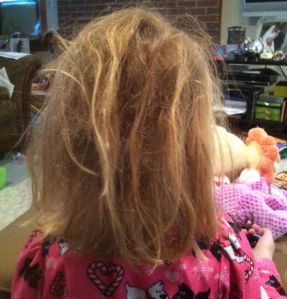 We’ve tried all sorts of things — shampoos, conditioners, detangling sprays, combs, making Daddyo do it… Nothing really works for long.

One day, after a particularly painful (and loud) session, I happened to mention to my daughter that it would be easier to brush her hair if it were shorter.

“Let’s cut it all off now, Mommyo,” said a  teary-eyed Five-Year-Old.

When we arrived for my daughter’s crewcut, the hairdresser politely urged us to reconsider shaving my daughter’s head. She suggested (and the mamas and the papas in the waiting area roundly endorsed) that we try the Knot Genie instead. 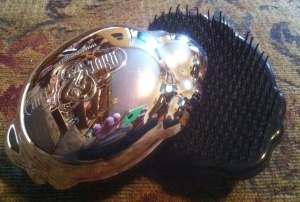 For those of you unfamiliar with the Knot Genie, it’s a handleless brush with plastic bristles. It reminds me of a curry comb for a horse, but without the handy loop on the back that keeps you from dropping it.

According to my daughter’s hairdresser, the secret to the Knot Genie’s success is its double layer of bristles. The short bristles deal with the knots on top of the hair, while the longer ones get at hairs closer to the scalp. She warned me to use it lightly the first couple of times, as the plastic bristles are extra scratchy until you wear them down a bit.

She then proceeded to give The Five-Year-Old a much more gender-appropriate ‘do, and wished us luck.

The first time we used the Knot Genie, the experience was kind of miraculous. The Five-Year-Old didn’t scream, sob, or whimper even once while I brushed her hair.

Although I was tempted to immediately declare the Knot Genie to be the best children’s product since Trunki, I decided I’d better wait and collect a bit more data, just in case that first experience was a bit of a fluke.

We’ve now been using the Knot Genie for six weeks, and I am ready to pronounce the verdict. The Knot Genie does do a good job of detangling my daughter’s unruliest hair. Sadly, the process has not remained pain-free, although my daughter’s reactions to it make me think that the Knot Genie has at least greatly reduced the pain involved.

The brush’s cute cloud shape is a mixed blessing.  On the one hand, it makes the Knot Genie a bit tricky to hold. The person using the Genie invariably drops it at least once during the brushing session. On the other hand, the lack of a handle means that any pressure applied on the Knot Genie goes directly to the hair, making it a much easier brush for my daughter to use on her own.

And that brings me to the real benefit of the Knot Genie. The Five-Year-Old now brushes her own hair. Occasionally I’ll have to borrow the Genie to get out a particularly stubborn knot, but for the most part, this brush has made my daughter self-grooming. I’m sure I don’t need to tell you what a tremendous relief that has been for both of us.

The Knot Genie comes in Pink, Puff of Purple, Camo, and Tinseltown Silver (guess which one The Five-Year-Old chose). We found ours at a local Snip-its for about $17, but it looks like Amazon is currently selling them for $10 + shipping.