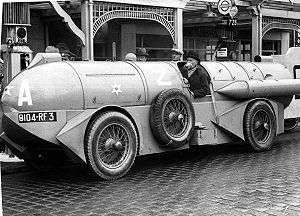 René Stapp and his rocket ship–I mean race car–preparing to set the land speed record at Daytona Beach in 1932. The car, which was reportedly named Jupiter, later burned in a fire on a beach in France. (Image: Florida Photographic Collection)

The Four-Year-Old, from the back seat of the car her mother is driving:

“Daddy is a really good driver. He doesn’t even run over anybody!”

3 Responses to “Driving while parenting”