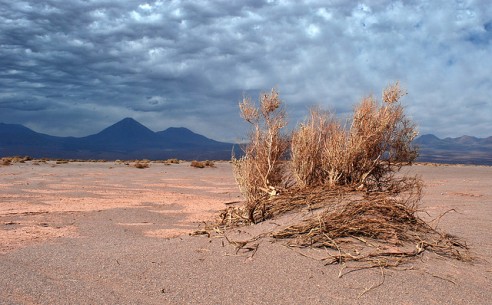 We interrupt our afternoon siesta to bring you this breaking news story from 2 to 7 million years ago. Just over 24 hours ago, our Rhode Island Correspondent alerted us to the recent discovery of an ancient whale graveyard in Chile.

Most of the fossils are from 8 meter-long baleen whales, but the graveyard includes other rare finds, including a dolphin with walrus-like tusks that had previously only been found in Peru and a probable three-member whale family group.

Chile’s Atacama Desert is a great place to hunt for the fossils of ancient marine animals. Previous expeditions in the region have uncovered an aquatic sloth and a seabird whose 5m wingspan easily outstrips a condor’s. And it’s not like they didn’t know there were whale bones in the area when they started work on the road (apparently you could see the bones jutting out of the rock). At the beginning of the project, the construction company asked Mario Suarez, director of the Paleontological Museum in the nearby town of Caldera, to monitor the work to make sure that no fossils were harmed.

Even so, this particular find apparently has paleontologists staggering around the desert in an emotionally turbulent blend of ecstasy and utter confusion.

Twenty of the seventy-five skeletons found so far are intact, with potentially hundreds more still to be found. There’s such a rich concentration of fossils that Suarez is seriously considering simply building a museum there to showcase the fossils where they lie, similar to the Dinosaur National Monument in Utah and Colorado.

Still, the find raises questions. What could cause so many animals to die in a single spot? Was it an earthquake? A drought that dried up the lagoon? A huge tidal wave that caused a mass beaching? (Marine animals are notorious self-beachers.)

In her email on the subject, our correspondent writes: “I don’t know where Chile falls on The Four-Year-Old’s scale of vaccinations, but I thought you guys might find this interesting.”

Doesn’t she know us well?

Well, Rhode Island Correspondent, the Four-Year-Old really struggled with the Fossil ROI for this one.

On the one hand, lots and lots of extremely well-preserved, rare, and exceptionally complete fossils just lying there for the picking and some great questions, such as why would a dolphin need tusks?

On the other hand, exploring paleontological sites in Chile would require several extra shots. Not as many as neighboring Peru, but still too many shots, The Four-Year-Old finally and very reluctantly decided. Which is why we will have to wait for the National Geographic special. Fortunately, the National Geographic Society is at least partly funding the excavation, so hopefully we won’t have to wait too long. In the meantime, we’ll content ourselves with mounting an expedition to the Dinosaur Museum in Utah and Colorado.

For those of you who like to keep track of these things, here is The Four-Year-Old’s updated Fossil ROI calculation. 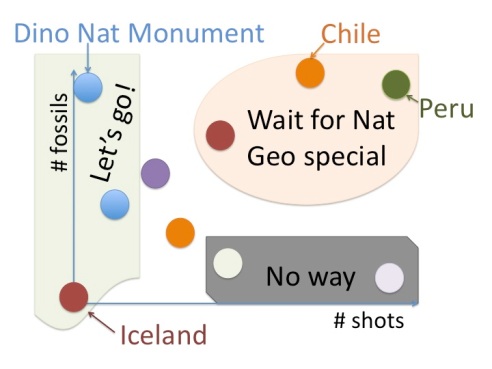 (Image Credit, because WordPress keeps randomly eating my captions and I didn’t take that gorgeous picture up top: The picture of Chile’s Atacama Desert was taken by Wilth, who published it on Flickr.)