While cleaning up the nonfiction 500 section of the middle school library after a particularly riotous set of future scientists, I came across David Quammen’s illustrated edition of Charles Darwin’s On the Origin of Species.

In his introduction, David Quammen describes Darwin’s writing style as that of “a gentle uncle, clearing his throat politely, about to share a few curious observations and musings over tea.”

Of course, I had to read it.

I’m only a chapter in and already I’ve been astounded at least twice.

Astounding Fact #1: Darwin was an avid breeder of fancy pigeons

No, really. Breeding fancy pigeons was a thing respectable people did in the 1850s.

Darwin was nuts about it. He talks about his habit with his usual humility.

“Believing that it is always best to study some special group, I have, after deliberation, taken up domestic pigeons.” (Darwin, p. 26)

Fun fact: In his book A Short History of Nearly Everything, Bill Bryson claims that Darwin was actually obsessed with earthworms and only took up pigeons on the advice of one of the editors who rejected an early version of On the Origin of Species.

Read a little further and you quickly realize how much work the phrases “after deliberation” and “taken up domestic pigeons” are doing in that sentence. They make what was clearly an obsession of history-altering proportions sound like a modest gentlemanly pursuit.

Once Darwin launches into his multi-page discussion of the visual and skeletal differences between a dozen different fancy pigeon breeds, the façade of modest gentleman breeder falls away. He’s obviously read every fancy pigeon treatise he could get his hands on, including several ancient and presumably hard to find ones. He must have spent years measuring pigeon jaws, legs, toes, vertebrae, and furcula (the wishbone). He took extensive notes on the subject of oil glands (or the lack thereof), flight patterns, individual pigeon voices and dispositions, plumage development, and the various types of down on the hatchlings.

He belonged to not one, but two separate and–judging from his evident pleasure in being allowed to join them–quite exclusive, London Pigeon Clubs. He also went to pigeon breeding conferences, and built up an impressive network of contacts among the fancy pigeon breeding set. He thanks two of them, the Hon. W. Elliot of India and the Hon. C. Murray of Persia, in his book for sending him skins (bird specimens) to advance his studies. 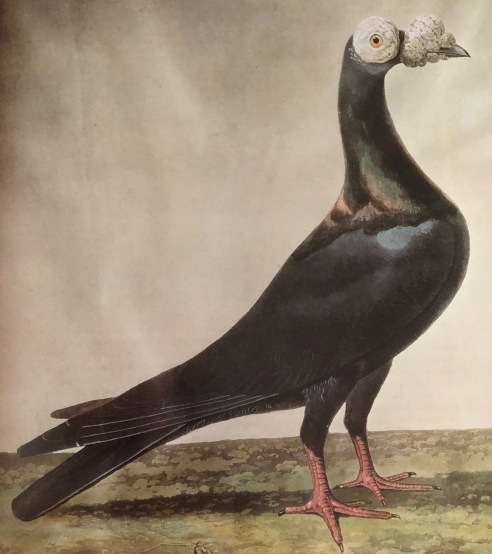 Two of the types of fancy pigeons Darwin studied while developing his theories of natural and artificial selection. Above, a carrier pigeon. Below, a pouter pigeon. (Illustrations from David Quammen, ed. Charles Darwin’s On the Origin of the Species, Illustrated Edition, pages 26-27.) 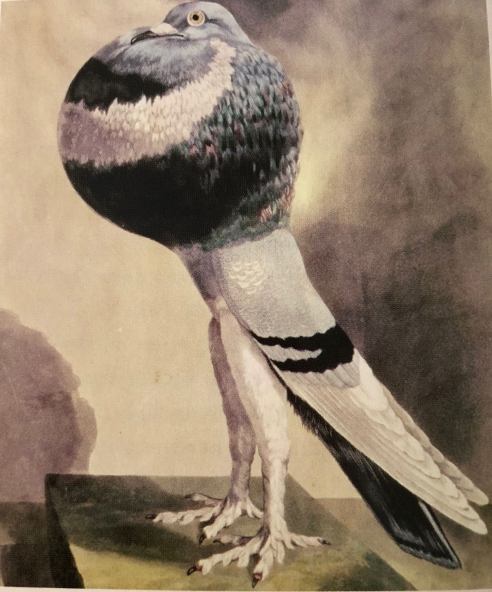 Why was Darwin so obsessed with pigeons?

The short answer is that Darwin studied pigeons for the same reason geneticists study pigeons today: to better understand the general principles of evolution and how specific genetic traits are passed on from one generation to the next.

Of course, Darwin doesn’t use those exact words. As he himself points out on page 21, at the time he wrote his book, “The laws governing inheritance [were] quite unknown.” Gregor Mendel wouldn’t publish his work on what he called “invisible traits” and we call genes until 1866, seven years after Origins was first published.

Still, Darwin was able to use his pigeon breeding to demonstrate his theory of artificial selection — the idea that people have played an active role in shaping specific animal and plant species to be more useful (or attractive) to us.

Accept that artificial selection is possible and you’re most of the way there when it comes to accepting natural selection (Darwin’s actual point in writing this book). After all, if humans can significantly reshape breeds in just a few hundred years of selective breeding, imagine the changes nature itself can make over millions of years.

But why pigeons, and not, say dogs?

To better understand how the process of artificial selection worked, Darwin needed a species that:

Pigeons fit the bill in ways other domesticated plants and animals didn’t.

“Nothing is more easy than to tame an animal, and few things more difficult than to get it to breed freely under confinement, even in the many cases where the male and female unite.” (Darwin, p. 16)

Pigeons had a track record of thriving and reproducing in captivity that stretched back centuries. Their young were themselves fertile, and grew up quickly, enabling Darwin to observe the effects of selective breeding choices over multiple generations relatively quickly.

Dogs reproduce well in captivity too. Pigeons, however, could be reliably mated for life. Darwin could keep several different pairs of pigeons of different breeds in the same aviary without risking the integrity of his experiments (a great cost-savings for any gentleman scholar).  Dogs are a bit freer, shall we say, when it comes to choosing mates, so would need closer supervision.

Pigeons varied greatly from breed to breed, and their physical appearance could be manipulated by breeders

If you are going to test how traits change over generations, you need a plant or animal that has been proven to be somewhat elastic in its appearance. Pigeon breeders boasted widely and often of their ability to breed birds with specific coloring or features in just a few generations. On page 35, Darwin quotes a fellow pigeon breeder, Sir John Sebright as saying that when it came to pigeons, “he could produce any given feather in three years, but it would take him six years to obtain head and beak.”

Through his pigeon clubs and conferences, Darwin gained access to an extensive network of fellow pigeon breeders, many of whom freely shared their notes and even samples of their flock (live and dead) with Darwin to advance his studies.

Because pigeons have been bred in captivity for thousands of years all around the world, Darwin was also able to find some ancient treatises on pigeons. He used these sometimes centuries-old documents to compare the characteristics of his fancy pigeons with features documented in pigeons of the same breed more than a century earlier. In the case of the English carrier and short-faced tumbler, Darwin was able to construct an almost perfect series showing how the defining characteristics of these species had been enhanced through selective breeding over the centuries.

Finally, Darwin was reasonably sure that all of the various breeds of pigeons shared a common ancestor

By the time Darwin wrote Origins, it was commonly accepted among naturalists that despite their great variety in appearance, all domesticated pigeons were in fact descended from the wild rock-pigeon (Columba livia). This was important because it gave Darwin an original species to compare the changes in the various breeds against, allowing him to demonstrate how dramatic the impact of artificial selection could be over time.

On page 35, he writes (no doubt extremely controversially):

“We cannot suppose that all the breeds were suddenly produced as perfect and as useful as we now see them; indeed, in several cases, we know that this has not been their history. The key is man’s power of accumulative selection: nature gives successive variations; man adds them up in certain directions useful to him. In this sense he may be said to make for himself useful breeds.”

(What do you want to bet that this passage caused at least half of the religious furor stirred up by this book’s publication?)

Naturally having realized the immense variation men could achieve in pigeons through artificial selection, Darwin would have known that it was at least possible for all domesticated dog breeds to share a common ancestor, right?

“I do not believe, as we shall presently see, that all our dogs have descended from any one wild species; but, in the case of some other domestic races, there is presumptive, or even strong evidence in favour of this view.” (Darwin, p. 24)

Darwin, you missed it by THIS MUCH.

As far as I can tell (and–necessary caveat–I haven’t finished reading the entire book yet, so I may be the one missing something), Darwin could easily imagine that the various breeds of fancy pigeons shared a common ancestor no matter which part of the world they hailed from because he could point to a contemporaneous species and say (essentially), “That’s the one. Fancy pigeons all evolved from that bird there.”

Even in 1850, the diversity among the breeds of dogs was so great that Darwin’s imagination simply failed him. Darwin wasn’t able to point to a single type of dog alive in the 1850s that exhibited all of the basic characteristics for the various breeds. Instead of concluding that this meant that the shared ancestor must have been some species of wild dog that has since gone extinct, Darwin decided it could just as easily mean that the different dog breeds had descended from seven or eight different species of wild dogs, not just one.

So, if Darwin isn’t the source for the idea that all domesticated dogs share a common ancestor, who is?

That, Gentle Reader, is a question for next time.

6 Responses to “Why was Darwin so obsessed with pigeons?”