Six and a half years ago, Michael proposed that we organize all of our book by color. Changing the color of the books in a room would be easier than repainting it, he argued. And so we did. We’ve kept the books organized by color (more or less) ever since.

For years, this system worked reasonably well, although the square footage of the shelves dedicated to our lovely sort-by-color system mysteriously kept shrinking.

When we are looking for a book to read, Michael and I rarely look for a specific one.  Instead, we are perfectly content to browse the shelves until we find one that sounds interesting in that moment. We also don’t reread books in general, so even if we loved a book immensely, we typically don’t worry too much about being able to find it again.

But there are certain types of books that we refer to over and over again. Like cookbooks, piano books, writing books, history books, and those few fiction books that we like to reread from time to time. So we started making exemptions to the sort by color scheme.

First, we exempted the cookbooks.

After all, hunting for a good recipe is hard enough. We set up a special cookbook-only bookshelf in the kitchen, and then stashed as many cookbooks as we could still find on it.

Then we exempted The Ten-Year-Old’s books.

In a vain attempt to keep the sort-by-color scheme going in at least one room of the house, we moved the Ten-Year-Old’s books out of the office and into bookshelves we set up in her room and in our living room.

You can see where this is going.

When The Ten-Year-Old inevitably ran out of shelf space, we gave her some dedicated shelves in the office. And so on, until fewer than half of the bookshelves in our home were still sorted by color.

The Ten-Year-Old has been lobbying for us to sort the books alphabetically for some time now.

She counts a number of librarians among her Most Influential Adults set, and while I am holding firm against any talk of implementing the Dewey Decimal System in our home, after six months of intense negotiations I finally agreed to sort books by type: fiction vs. non-fiction, young adult vs. grown-up. Possibly even alphabetically by first letter of author’s last name.

“And by series, Mommyo. I want all the books in a series to be together.”

First step in sorting your books by type: Make a colossal mess

Day 1 debris field. At this point, we had barely even gotten started. (Photo: Shala Howell)

We have an enormous number of books, including multiple copies of Marie Kondo’s The Life-Changing Magic of Tidying Up in which Kondo posits that having a mere 40 books is really quite sufficient. I have kept both copies, because the irony of that brings me joy every time I contemplate it, and really, isn’t the point of Kondo’s work to construct a home environment that brings you joy?

I digress. We have an enormous number of books, but with the help of The Ten-Year-Old’s two babysitters, we were able to take down and sort through every book in our house (that we know of) in just three days. 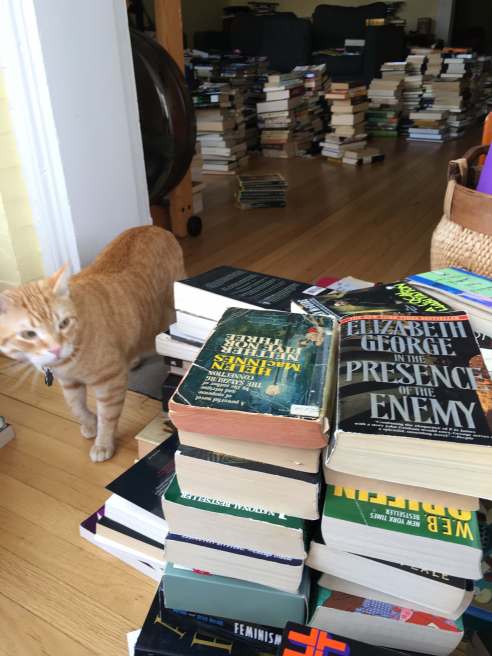 Day 2 Debris Field. Canelo is seriously displeased that the book project has spilled over into his sun room. (Photo: Shala Howell)

Three more days of arranging books on shelves and we were done.

How we sorted our books by type

The non-fiction books are grouped loosely according to topic and clustered on one side of the office. The fiction books are arranged even more loosely. The Ten-Year-Old’s books are still on specific shelves in her room, the living room, and on her now-traditional office shelves. They are not alphabetized, but they are all within her reach.

The grown-up fiction books are loosely alphabetized according to the first letter of the author’s last name. The arrangement would still probably cause palpations in every librarian’s heart, but with luck it will work for us.

View in my office this morning (Photo: Shala Howell)

Sadly for Canelo, several hundred discards are still piled up in his sunroom. I guess I’d better deal with those today.