What Wolf’s Boy is about

Set in Paleolithic times, Wolf’s Boy tells the story of Kai. Shunned by the members of his village because of his club foot, Kai ultimately turns to a local pack of yellow wolves for companionship.  When Kai discovers a motherless cub in the pack, he brings her home, only to find that life in a village is just as dangerous for a wolf cub as life out in the wild should have been for Kai.

“I like that it’s really fun. This boy gets a big transformation between everyone thinking he was a cripple because he needed a stick to walk with his club foot and being a hunter with a weapon. In his old village he was not allowed to touch a weapon because he would have cursed it. For newer readers, there’s a collection of words in the different languages in the back.”

This Journal Belongs to Ratchet by Nancy J. Cavanaugh

What This Journal Belongs to Ratchet is about 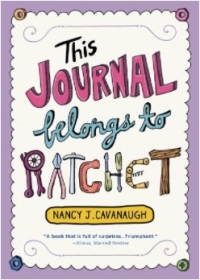 In This Journal Belongs to Ratchet, we meet 11-year-old Rachel Vance. Homeschooled for years by her activist father, Rachel knows a lot about repairing cars and fixing up old homes, but a lot less about her dead mother and how to make friends. When her father gives Rachel a notebook and tells her to use it for her writing lessons, Rachel hatches a secret plan to use the journal to change her life for the better.

Why The Ten-Year-Old recommends it

“I like that this girl was slowly finding out more about her dead mother, but her mother turned out not to love her. That’s why her dad kept everything about her mother in a locked box. She made some friends in this book, which she had never done before because she was homeschooled. You can really feel how this character thinks. She repurposed a new notebook that she’d gotten because she couldn’t work on yellow legal pads any more. It was supposed to be a writing notebook, but she turned it into a journal. She used all the different writing styles, like concrete poetry, to write her entries.”

Who would like this book, according to The Ten-Year-Old:

“Any reader who likes poetry and a good storyline”