As you may remember from my original post on the oddities of tennis scoring, Billie Jean King believes that the reason tennis is scored Love-15-30-40 may have been because the clock hanging over the indoor tennis court was the handiest tool available for keeping score.

When I shared this theory with Daddyo, he immediately shot it to bits.

“Did medieval clocks even have minute hands?”

There you go again, Daddyo, shattering my favorite theories with your pesky insistence on having the actual facts.

I had no option but to do a little digging to see what I could find out.

Right away, I could tell I was going to have a problem.

According to medieval fiction writer and history blogger Andrea Cefalo, Jost Burgieven didn’t invent the minute hand until 1577. Worse, minute hands weren’t a regular feature on clocks until the 1680s. There’s no way our hypothetical clock hanging over our 12th C French tennis court would have had one.

Score one for Daddyo.

In fact, given that the time pieces in 12th C France tended to be sundials, candle clocks, and water clocks, there’s a very good chance that even if there had been a clock on the tennis court, the score-keeper wouldn’t have been using it.

Let’s count the reasons, shall we?

Ok, sundials wouldn’t have worked. What about candle clocks?

Candle clocks are basically what they sound like. Take a candle, figure out how quickly it will burn based on its thickness, mark the candle (or place it next to a plate with the time increments marked on it), and light the candle. As the candle burns down, it lets you track the passage of time (more or less). 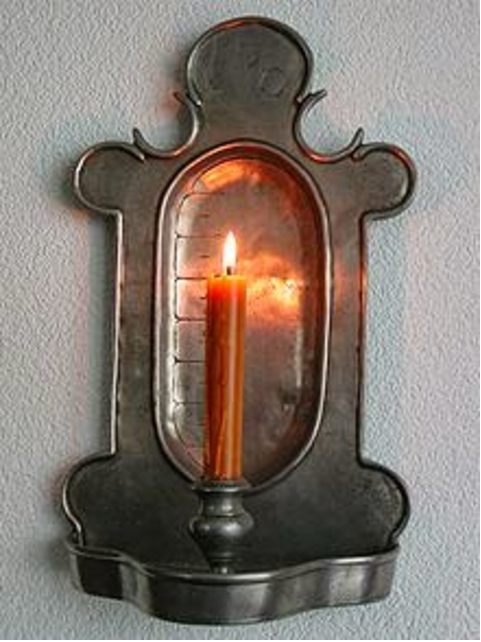 Candle clocks were a great way to tell time indoors.

But would candle clocks have been a great way to keep score in tennis?

I suppose if you had one candle clock for each player and a set of candles chopped to appropriate lengths to reflect the various possible scores and you never lit any of the candles on fire, it might have worked.

Is anyone else feeling a bit of nostalgia for a world in which knowing the hour more or less was good enough?

What about water clocks?  Would they have worked as a way to keep score in tennis?

As far as I can tell, this outflow water clock is from Ancient Egypt, but it gives you the basic idea. 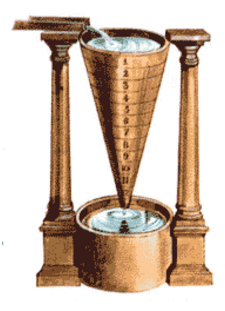 I suppose you could do that by temporarily plugging the downspout on a water clock and adding (or releasing) water as needed to reflect the score.

Still, that seems like a pretty silly way to keep score.

I’m sorry to say it, but I don’t think Billie Jean King’s theory that tennis scores advanced in 15 point increments because the first tennis players used clocks to keep score holds any water at all.

So how did they keep score back then?

Did they keep running totals in their head? Use quill and parchment? Have the players move up and down on the court?

Maybe they used a couple stacks of denier coins (the medieval equivalent of a penny). They certainly would have had plenty of denier handy. According to the Smart Set, folks have been betting on tennis games for nearly as long as any form of the sport existed. Henry VIII lost 50 pounds on a tennis game back in October 1532.

The Smart Set claims that the gros denier would have been worth 15 deniers in jeu de paume days and speculates that the coin may have been the real basis for the weird scoring in tennis.

I have to say, I love the idea of rampant gambling in medieval times being the reason modern tennis scoring is so bizarre.

Unfortunately, everything else I’ve read pegs the value of a gros denier at something between 4 and 12 deniers, making that theory look just as unlikely as all the rest. Also, I have a sneaking suspicion that the gambling would have started after the rules of the game (including the way it’s scored) had already been set.

Maybe the bizarre nature of tennis scoring really was a numerology thing.