The crickets may have gone back to school, but we’re still learning from them. Last week, we explored the question of whether crickets have hearts. This week we’re learning about ovipositors, aka that black thing that lets you tell the difference between male and female crickets.

How can you tell the difference between a male cricket and a female one?

Although Charles Allen Cricket II and Debbie Davis Cricket are no longer part of the Caterpickles family, I’m certain they won’t mind if we borrow their pictures for a little demonstration.

This is Charles Allen Cricket II. I have it on excellent authority that he’s a male.

And this is Debbie Davis, Cricket, most certainly a female.

How can I tell Debbie’s female?

I know this because Debbie’s ovipositor is showing. The ovipositor is the organ female crickets (and other female insects) use to lay their eggs. It’s the little black stump coming off Debbie’s bottom. Here’s a closeup. 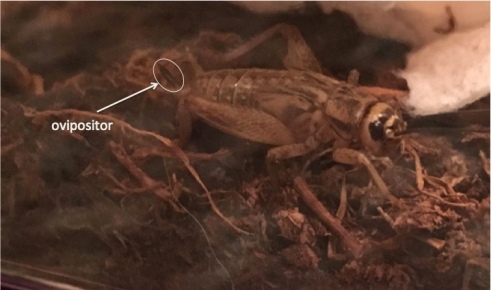 The two bits sticking out on either side of the ovipositor, by the way, are called cerci. These are sensory organs that the crickets use to feel their surroundings. Male crickets have them too.

2 Responses to ““How can you tell the difference between a male cricket and a female one?””