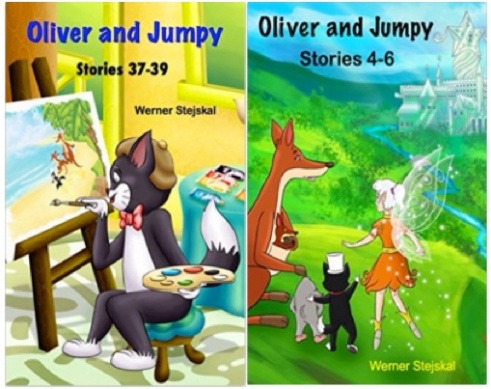 This week, The Nine-Year-Old lands an interview with Oliver from Werner Stejskal’s Oliver and Jumpy picture book series. Thanks for giving Oliver access to your email account, Mr. Stejskal!

We’ve talked about the Oliver and Jumpy picture book series on Caterpickles before, but in case you missed it, I’ll just give you a bit of background on the characters before The Nine-Year-Old takes over the post.

Oliver is a rather dashing tomcat, with a tuxedo coat, a white top hat, and fairly robust self-esteem. His best friend is a female kangaroo named Jumpy. Oliver loves to ride in Jumpy’s pouch when they head off on their adventures. (He calls her his kangaroo taxi.)

We discovered these stories several months ago. Although paperback versions of these books are now available on Amazon, at the time they were only available as ebooks. I was dubious about reading a picture book on a black and white Kindle, but The Nine-Year-Old says it works just fine. 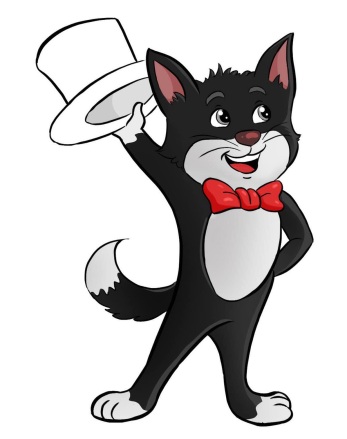 When Werner Stejskal contacted me recently to ask if we would be willing to review the Oliver and Jumpy books on Caterpickles, The Nine-Year-Old had something slightly different in mind.

The Nine-Year-Old: “Mommyo, did you think I could do an interview with Oliver instead?”

Mr. Stejskal was willing to give it a try, so The Nine-Year-Old borrowed my computer to email Oliver some questions. Oliver wrote back within 24 hours.

Now that you’re all caught up, let’s go to the interview.

The Nine-Year-Old: “Oliver, how did you and Jumpy meet?”

Oliver: Glad that you asked! It was the best day of my life and I love to talk about it. One lovely day I had a long walk with my friends. We were going to find flowers to make tea. On the way we found Jumpy lying on the floor with a broken leg. She had jumped too high and slipped. We all helped to bring her to the doctor to have her fixed up. From that day on, we became best friends. (You can read more about this in Oliver and Jumpy, Story 29.)

The Nine-Year-Old: Do you mind sending me a map of your neighborhood?

Oliver: In my country, Sillandia, everything is silly, as you can imagine. We don’t have maps. I would have to take you around myself to show you my neighborhood. Maybe Jumpy would let us ride in her pouch.

My treehouse is near a large lake and a brook. There is also an old castle nearby, which we explore when we feel like having an adventure. When we want something sweet, we jump down to the pterosaur airport and catch a flight on a pterosaur’s back. Flights leave for Santa’s chocolate factory in the sky nearly every day. Come to think of it, sitting on a pterosaur’s back eating Santa’s chocolate would be an even better way to tour my neighborhood.

Oliver:  Where do I start? My house is very special. It is right up the mighty oak tree. My neighbor is the very wise Olly the owl. Olly is always very helpful with advice when I don’t know what to do. He is like a father to me.

I just got some new neighbors — a whole village of bee gnomes. That’s pretty cool, because I get free honey as rent. Cats love honey and I always dream of stealing some honey comb from a beehive. (Don’t tell the bee gnomes!) 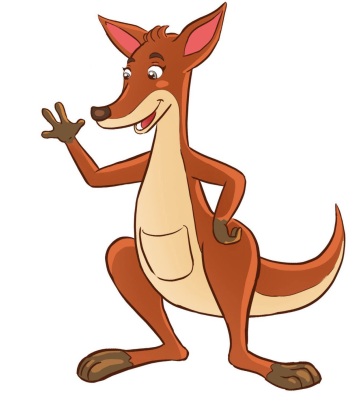 The Nine-Year-Old: Where is Ghost Castle?

Oliver: Ghost Castle is up a little hill on the other side of the lake. Jumpy and I love to go there in the school holidays when we are bored. Every old door in the castle hides another fun adventure. You never know what you’ll find when you open a door. Sometimes you find something dangerous, but often it’s just something funny or beautiful. Never knowing what we’ll find makes opening those old doors pretty exciting for me.

The Nine-Year-Old: What do letter pigeons look like in Sillandia?

Oliver: Our letter pigeons look just like any of your pigeons living in town, but they all wear a little postman hat. They never stop if somebody in a park wants to feed them, because they know that the mail has to be delivered quickly. But they do like to get some corn as thank you when they deliver a letter. Sometimes they fly a very long time and are exhausted. Then they will gratefully accept a bit of water as well.

The Nine-Year-Old: Have you visited the fairies since Story 5?

Oliver: Oh yes, the fairy queen comes to visit Sillandia once in a while. A while ago she arrived very unhappy. Her country was threatened by a giant and his master, the bad magician. The three of us had to travel with her to save her country. It was quite a fight. It took all of our wits to save the glass castle and the fairies. (You can read about it in Oliver & Jumpy, story 46).

Born in Vienna, Austria, Werner Stejskal now lives in Perth, Australia with his wife, two married children, and three grandchildren. He began writing children’s stories after retiring from the United Nations in Vienna.