Cross-posted to BostonWriters. Hey it’s NaNoWriMo. I’ve got be careful how I use my time. 🙂

When I learned recently of a Victorian taxidermist named Walter Potter who delighted in crafting ornate scenes using preserved animals dressed in period costume, naturally my first thought was:

“I wonder if Walter Potter was related to Beatrix Potter?”

Consider The Kittens’ Wedding (below), which Walter Potter completed in the 1890s with the help of one of his neighbors and his daughter Minnie. The kittens are decked out in little morning suits and frilly dresses complete with shawls, jewelry, and (although you can’t tell from this photograph) little knickers.

Walter Potter’s Kittens Wedding, circa 1890. (Via EBTPearce on Tumblr)

What does this remind me of?

Tom Kitten and his mother by Beatrix Potter.

Two Victorians named Potter who made a living dressing up critters in human costumes? Sounds like a family business to me.

Turns out, not so much.

Who was Walter Potter?

Walter Potter (2 July 1835-21 May 1918) lived his entire life in the West Sussex village of Bramber, where he served as churchwarden and amateur taxidermist to the local population. A self-taught taxidermist and naturalist, Potter began crafting tableaux of his specimens as a way of preserving and storing them. His most famous creation is his first one, The Death and Burial of Cock Robin.

Inspired by a book of nursery rhymes given to his little sister Jane in 1841, the tableau includes almost one hundred native British birds and took Potter more than seven years to complete. Four of the birds in the tableau–the red-backed shrike, cirl bunting, wryneck, and hawfinch) are either rare or extinct in Sussex today.

Within Cock Robin, Potter painstakingly recreates every line of the original poem. The sparrow holding his bow and arrow, the beetle crafting Cock Robin’s shroud, the wrens serving as pall-bearers, and the grave-digging owl with his spade and shovel are all there. So are the Dove in his capacity as chief mourner, the rook with his book ready to lead the service, and the thrush poised in his bush to sing the psalm. 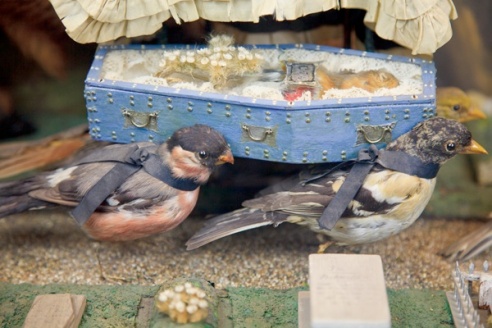 Closeup of the pall bearers in the Death & Burial of Cock Robin. (Photo via Walter Potter Taxidermy)

As you might imagine, Potter’s tableau became something of a sensation in his hometown, attracting lots of visitors to the White Lion, the village inn in which The Death & Burial of Cock Robin was housed. The response encouraged Potter to create several similar scenes over the years, and the vats of beer consumed by visitors after seeing Potter’s work encouraged the White Lion to provide Potter with land next to the inn on which to build a proper museum to house his work in 1880.

So what was Walter’s connection with Beatrix?

First let me say that Walter and Beatrix Potter were not related. Nor was Walter Potter inspired by Beatrix Potter’s work, although the reverse might possibly have been true.

Beatrix Potter (28 July 1866 – 22 December 1943) could theoretically have taken a train to visit Walter Potter’s original museum in Bramber. Still, there is no actual evidence that she ever did. As a result, Beatrix, who published her first book The Tale of Peter Rabbit in 1902, might have been directly influenced by Walter Potter’s works from a visit to his museum, or she may have simply picked up on the popularity of anthropomorphic taxidermy in Victorian society at the time.

What made anthropomorphic taxidermy so fashionable? 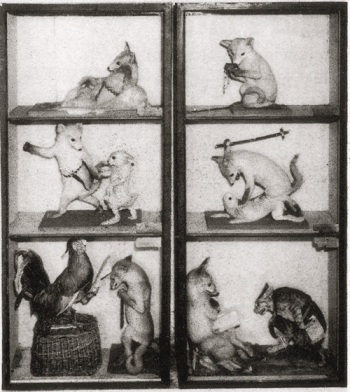 Herman Ploucquet’s Reynard the Fox tableaux, exhibited at the Crystal Palace as part of the Great Exhibition of 1851. Walter Potter visited the exhibition as a sixteen-year-old. (Photo via Ravishing Beasts)

Odd though it may seem to us now, German taxidermist Hermann Plouquet made a sensation at the Great Exhibition of 1851 with a series of anthropomorphic tableaux depicting the story of Reynard the Fox. Walter Potter, who visited the Great Exhibition as a sixteen-year-old was almost certainly influenced by seeing them.

He wasn’t alone in admiring them. After the exhibition, no fashionable Victorian parlor was complete without a case of birds or other preserved wildlife.

Before you write off anthropomorphic taxidermy as yet another creepy thing Victorians did, you should know that MacLeans has called “arranging dead animals in anthropomorphic fashion … the hottest art trend to hit London since Damien Hirst suspended a shark in formaldehyde.”

The uptick in interest is due in no small part to the revival of interest in Walter Potter’s curious little tableaux, and manifests itself in the popularity of classes on “black rat taxidermy” and “two-headed rabbits” among London city dwellers, as well as intense demand for pieces by modern taxidermists like Polly Morgan, whose satirical works regularly fetch prices in the high five figures from serious collectors.

Want to know more about the man whose work kicked off this latest craze?

Dr. Pat Morris and Joanna Ebenstein recently released the fascinating book, Walter Potter’s Curious World of Taxidermy. The book is full of photographs and detailed descriptions of the most famous of Potter’s now dispersed collection, as well as a brief history of Potter and his museum.

One Response to “Was Walter Potter related to Beatrix Potter?”