School’s out and we’d rather be outside. While that doesn’t mean we’ve stopped reading, it does mean I don’t want to spend a lot of time reviewing. Naturally, I feel guilty about that, so I’m going to experiment with giving you three quick hits on books (and music) that we’ve enjoyed over the years, rather than one long review.

We first read this book when The Five-Year-Old was just a Two-Year-Old, but our love for it remains strong. Back then I used it as a way to introduce the idea that mixing two colors makes another color. That made this book a fabulous introduction for a fun (and appropriately messy) toddler art project. Now that The Five-Year-Old is beginning to read on her own, this book is enjoying a surge of popularity thanks to its prominent place in the roster of The Five-Year-Old’s Favorite Books to Read to Mommyo.

Really a CD packaged inside a book of sheet music, Blue Moo is a medley of silly songs written and sung by well-respected artists like B.B. King, Neil Sedaka, and the Beach Boys’ Brian Wilson. Although the humor in the songs appealed immediately, I’m not a fan of 1950’s style music, so I had to listen to the CD once or twice before I liked it. Now I’m addicted to it, which is convenient, since it’s just about the only thing my daughter wants to listen to right now. Other than Elvis. 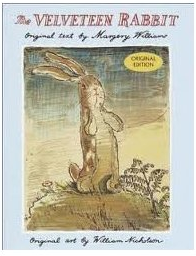 The Velveteen Rabbit tells the story of a stuffed rabbit who becomes real through the love of a little boy. As such, it’s the perfect tale for The Five-Year-Old, who has a rather impressive collection of stuffed animals and enough love and determination to make them all real. Be warned that while it’s possible to read the entire thing out loud to your child in one sitting, it will be a 20-minute commitment on your part. The first time we read the book, we picked it as a pre-bedtime story, so had to stop in the middle and continue the story the next day. Since then, I’ve been using this book as an excuse to take a break in the afternoon. Thankfully, it stands up to repeated readings.