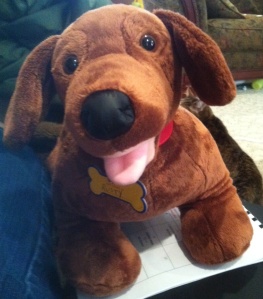 The Build-a-Bear Lady, preparing to sew up The Five-Year-Old’s new dachshund at the store’s stuffing station: “Do you know if your puppy is a boy or a girl yet?”

The Build-a-Bear Lady: “Well, do you have a name picked out for your puppy yet?”

The Five-Year-Old: “Rusty the Narcoleptic Dog.”

The Five-Year-Old, retrieving her dachshund from a stunned Build-a-Bear lady: “I’m not sure yet.”

Carrying him over to the bath area, The Five-Year-Old stands Rusty up for his bath. Suddenly she knocks Rusty on to his side and makes snoring sounds.

3 Responses to “Rusty the narcoleptic dog”