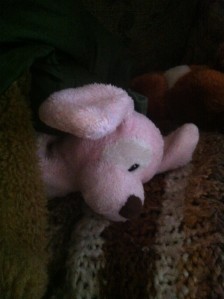 Early Friday morning, well before sunrise, The Four-Year-Old clambered onto the couch next to me, her sleeping friend Sparky in hand. In what I thought was a clever campaign to get The Four-Year-Old to go back to bed until at least 6:30, I held Sparky up to my ear and pretended to have a conversation with him.

The Four-Year-Old watched and waited politely, as Four-Year-Olds sometimes do. After I told her that Sparky thought they should go back to bed, she asked: “How do you know what Sparky says?”

Mommyo, mystically: “We have a connection.”

The Four-Year-Old, practically: “Me too, but my connection isn’t working because it thinks I’m still sleeping.”