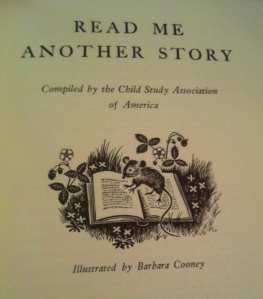 Read Me Another Story
Compiled by the Child Study Association of America
Illustrated by Barbara Cooney
Thomas Y. Crowell Company, 1949
Age Range: 4 to 8

One of the many things I love about my Aunt Jeanne is that she has fabulous taste in books. (I also love that she will endure a seven-hour drive each fall just to come keep The Four-Year-Old and me company for a few days, but that’s another post entirely.)

I credit her gifts to me during my formative years with at least part of my passion for reading. (As loyal readers know, my mom also gets a huge chunk of the credit.)

Aunt Jeanne is working hard to instill the same devotion for books in my daughter. Each trip so far, she has come bearing a lovely book of some sort to share with The Four-Year-Old. I thought Jeanne had outdone herself the year she brought Bear Feels Sick by Karma Wilson. It’s a lovely book, beautifully illustrated, lyrical to read, and conveys a sweet message about being cared for when you need it and caring for others in turn. I honestly didn’t know how she would top it.

But I should have had more faith.

The next year, she brought us her personal edition of Read Me Another Story. My great-aunt Marian had given it to Jeanne when she was young, and now Jeanne was keeping up the tradition by passing it to my daughter.

This has a lot to do with my affection for this book.

The book is a collection of short stories and poems for children, written years ago obviously, but whose themes are relatively untouched by time. No Mr. MacGregors running around taking potshots at the cast to explain away here.

Many of the stories deal with issues common to children of a certain age, using language they can relate to and without being too heavy-handed with the teachable moments. The cumulative effect reminds me a bit of Mr. Rogers. Take the story “When Susie was just the right size” by Louise Woodcock:

One morning she thought she would like to take a ride in Baby Robin’s gocart. She climbed in. It was a very tight squeeze.

“Susie!” called her big sister Margie. “Get right out of there! You’re too big to ride in that gocart!”

Susie climbed out and looked around. She still wanted a ride. There was big brother Peter’s bicycle leaning against a tree. She wheeled it out on the path. Then she tried to make it stand up while she climbed on the back step. But the front wheel wobbled and then crash — the bicycle fell right over with Susie in a heap on top of it.

Peter was just coming around the house. “Susie, you leave my bicycle alone!” he shouted. “You know very well you’re too little to ride a bike!”

Susie crawled off the bicycle. Her chin was bumped. Her arm was scratched. Her knee was scraped. And Peter was cross at her. She began to cry.

The lady next door looked over her garden wall. “Why Susie Sanders!” she said. “Get right up and stop crying. You’re much too big to cry!”

By this time, I was nearly in tears myself, but The Four-Year-Old was nodding her head sagely. She knew exactly how Susie felt. I won’t spoil the story by giving you precise details about how it ended, but I will say that a situation comes up in which Susie is able to save the day by being exactly the right size. And The Four-Year-Old, who had walked every step of the journey with Susie, cheered.

Other stories deal with issues The Four-Year-Old is trying to figure out in similarly approachable language. There’s the story of the silly woman who decides her farm isn’t fancy enough so tries to dress it up by buying her animals and children completely inappropriate clothing that prevents them from doing the things animals and children do. The only thing left for them to do is to sit around looking very very stylish, while feeling very very bored, very very hungry, and very very unhappy. It reminds me (and no doubt The Four-Year-Old) of the time I dressed The Four-Year-Old up in a very stylish white silk dress, with a poufy skirt that kicked out every time she twirled, and then spent the rest of the afternoon desperately trying to keep her from twirling for fear she would slip and get grass stains all over her fancy dress. At the end of the story, the woman concludes, much like I did at the end of that day, that life is much better when we are “very very stylish only when we have to [be].”

Another story deals with moving and the process of becoming accustomed to a new place and all the change in routine that involves. Others talk about everyday things, like taking baths, the feel of new shoes, the comfort of old ones, learning to whistle, and the delightful squishiness of mud. Poems interspersed with the stories keep the pacing of the collection interesting while exposing your child to the idea that poems can be very short–just enough to capture a fleet-footed thought, or long enough to tell a whole story.

Scattered throughout the book are simple black and white illustrations, comforting and nostalgic all at once. My daughter’s favorite is this one of Gilbert, an old car who is fixed up by his new owner. She’s referred to it several times in building a rather impressive series of Lego cars, all of which are naturally named “Gilbert.”

Read Me Another Story is out of print, so your best bet for finding it if you don’t have an aunt with a copy, is your local library or Google books.

(Psst: Did you know you can use Google books to figure out which libraries in your area have certain books? Here are the search results for Read Me Another Story, using one of many central Boston zip codes. Swap in your own zip code and have at it.)

And now it’s your turn. What are you reading this week?

4 Responses to “Book Review: Read Me Another Story”