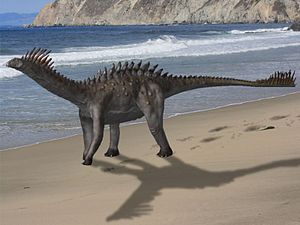 But before we do, I feel compelled to point out that I have not done an exhaustive review of the available literature on swimming sauropods. I have done a Google search.

Based on this extremely scientific approach, it appears that everyone now seems to agree that sauropods would have spent most of their time on land. (Regular readers will remember that this was not always the case.)

I also found a lot of people who believe that sauropods would have spent at least part of their time in or near water. Sauropod footprints are frequently found near coastlines and in floodplains, and sauropod fossils have been found mixed in with those of marine animals, facts that suggest sauropods may have preferred wet or coastal habitats. Given this, it seems reasonable to suppose that sauropods would have crossed a river or two when looking for food.

But would they wade across those rivers or swim them?

Reading the Footprints
Paleontologists look first to trace fossils (footprints not bones), to answer the question of whether dinosaurs could swim. Why? Because finding the bones of a dinosaur in deep water doesn’t always mean that the dinosaur lived and died in deep water. Predators could have moved the body after death, or the dinosaur could have died near a river and been carried to deeper water by a flood or landslide. Or maybe sauropods roamed all over. The fact that we find their footprints mostly in riverbeds and coastal areas might mean nothing more than that these wet, muddy areas are best suited for preserving footprints and other fossils.

Still, most land animals alive today can swim if they find themselves suddenly dropped into a pool of water, so at first blush it seems reasonable to hypothesize that sauropods could as well. And back in the days when paleontologists thought that sauropods would have spent most of their life partially submerged in water, the idea that sauropods could swim must have seemed even more obvious. Aquatic creatures swim, right?

So when Roland T. Bird went hunting for sauropod footprints around the Paluxy River in Glen Rose, Texas in the late 1930s and early 1940s, I’ll bet it didn’t take him too long to come up with an explanation for the sets that seemed to include only the dinosaur’s front feet.

In his 1944 article, “Did Brontosaurus ever walk on land?”, published in Natural History magazine, Bird suggested that the front-feet only trackways had been made by a floating sauropod who was pushing himself along underwater by his front feet.

Whether propelling yourself through the water by pushing against the riverbed with your feet is really swimming is the least of our problems.

A far more pressing issue is whether those front-feet only trackways can be read as evidence of swimming (or deep water wading) at all.

More recently, paleontologist have come to believe that those front-feet only tracks are far too regular to have been made by a dinosaur swimming (or wading) through the water. Perhaps those tracks were made on land and the dinosaur’s front feet simply sank deeper into the mud than its back feet. If that were the case, the tracks made by its front feet could have remained long after those made by the back feet had eroded away. (At least, I think that’s what these guys are saying.)

Here’s their theory: On land, most of a sauropod’s weight rests on his back legs. The study Wilson and Henderson did showed that in the water a sauropod’s weight distribution changes. Thanks to the natural buoyancy of the sauropod’s body (the same reason you and I are lighter in the water when we swim), the deeper the dinosaur goes, the more his weight shifts to his front feet, so that at some point, a sauropod who was walking on all four feet creates a trackway that makes him look like he’s only using his front feet.  (You can find a reader-friendly explanation of their research here and here.)

Float or Flip? The Tipsy Punter Problem
Put those same sauropods in deep enough water, though, Henderson says, and they would lose contact with the bottom altogether. And suddenly the way their weight is distributed under water becomes a very large problem. “The slightest wave would tip it sideways,” at which point the sauropod would be in serious trouble, as Henderson told ScienceNOW in an October 2003 interview.

(Henderson expands upon this idea in a May 2004 article, somewhat amusingly using the term “tipsy punter” to describe sauropods who have waded in too deep and would be prone to flipping over onto their sides as a result.)

As a general rule, Henderson says that a sauropod could wade into water that was chest-deep before getting into trouble. That means a Brachiosaurus could wade as deep as 4.3 m; an Apatosaurus, 3.7 m; and a Diplodocus, 2.4 m.

I should note that not everyone accepts Henderson’s tipsy punter theory.

The Bottom Line: Who Can Say?

As far as I can tell, most people would agree that sauropods could and did wade in water. But wading isn’t really swimming, is it?

Also few dispute that like birds, sauropods had hollow bones, which means they would have been buoyant in water (a fancy way of saying they’d float). Floating aimlessly down a river is not swimming either, however.

No one (at least no one that I could find) has put forward definitive evidence that sauropods could actually swim, in the sense that they could propel their bodies intentionally through the water without making contact with the riverbed below. In fact, if the tipsy punter theory is true, there is some reason to believe that their bodies were simply too unwieldy to control in the water unassisted.

In contrast, a May 2007 National Geographic article states outright that scientists think large theropods (dinosaurs that walked upright on three-toed feet) like T. Rex could swim.

A Final Note:
I am completely indebted to Jeff Wilson for my knowledge of Bird’s 1944 article, “Did Brontosaurus ever walk on land?” If any of you can find it online, please point me to it. I’d love to read it for myself.

7 Responses to ““Could sauropods swim?””