This kit is one of the items I picked up earlier this summer from the Magic Flute Toy Shop‘s Aisle of Scientific Wonder. The idea behind this kit is  appealing: a set of simple experiments that kids can do that introduce them to the science behind our weather.

The execution, unfortunately, is uneven, which is why we at Caterpickles Central give this product only 3 of 5 stars.

What’s Supposed to Be in the Box

As you may have guessed from the title of this section, our first complaint is that some of these items were missing. Our box included three suction cups, not four. This was irritating, but not a show stopper. Although it would have been nicer to mount the weather station on the fence using the suction cups, we could still use the stakes to secure it to the ground. 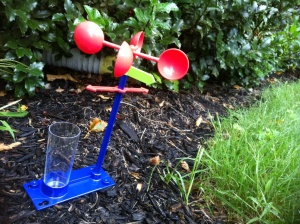 Our weather station out in the field.

Far more important was the fact that one of the double-sided arrows was missing, which meant that the wind rose on our weather station could either point East-West or it could point North-South. Having a wind rose that marked all four cardinal directions would have made it much easier to tell which direction the wind was blowing. But we were able to use the compass on my iPhone to align the one set of arrows we were given to point North-South, so we could make a reasonably accurate guess at the wind direction. And with a four-year-old and an English major on the squad, we at Caterpickles Central are generally content with reasonably accurate science.

Still, it’s one thing to have your skill set be the reason that your science is only approximately accurate. It’s quite another to have your lab setup be at fault, especially when you’ve outsourced it.

The Main Event: The Experiments

The guidebook includes instructions for 10 different experiments. Some are really interesting, like the one where you use an old glass jar, some dirt, a small plant, a cup of water, a rubber band and some plastic wrap to create your own weather system. We also had a lot of fun using the weather station to measure the weather outside over the course of a week in which it mostly rained.

Other experiments are just too simple, even for a four-year-old. Don’t get me wrong, my daughter loved putting little tins of water around the house. But even she knew that if you left them there the water would eventually evaporate. And forget waiting two days to view the results. My four-year-old was on to the next thing in about 5 minutes.

Although there would have been little learning from the experiment the way the guidebook had written it, the bare bones instructions did inspire my daughter to upgrade the question from “Will water evaporate if you leave it out?” to “Will water evaporate at different rates in differently shaped containers?” In other words, does surface area (and air flow) affect evaporation?

To test this my daughter put a 1/2 cup of water in a plastic Aquafina bottle and a 1/2 cup in the bottom half of a 2 cup Snapware and placed them side by side on the kitchen windowsill. We’re still waiting for the results. (At the rate this is going, we may be waiting a very long time.)

Still other experiments just don’t seem to work. Like the thunder pouch, an exercise that requires you to fold an 8.5 x 11 sheet of paper into a pouch that is supposed to make a noise when you snap it open. The instructions for this one failed me. For the most part I could decode the folding instructions, but when it came to the critical point, the final fold and the snapping of the thunder pouch, I could have used some verbal instructions. Maybe it’s my origami or my grip, but there’s no pop when I snap it. But my daughter enjoyed folding paper into random shapes that approximate the drawings in the book anyway. (This one requires more skill than my daughter could muster, but you can’t fault the kit for that — it does say clearly on the box that it’s intended for scientists 5 and up.)

As you can see, the Knowledge Wheel is almost exclusively made up of pictures. This fits in with the idea of a science kit that doesn’t rely on reading skills. But it also makes it a bit difficult to figure out what exactly is going on here.

I’ll make it easy for you:

Your Caterpickle’s mission, should he or she choose to accept it, is to match the main cause of the weather with the tools used to measure it and its most extreme outcome. They will know they’ve got it right when the answer dot colors on all three wheels match.

(Now if only that explanation had been included in the bit of the guidebook directed at the parents. As it was, I had to study the knowledge wheel for about 10 minutes to figure it out.)

My own Caterpickle hasn’t been all that interested in the wheel. Yet.

The Bottom Line: Did We Get Our Money’s Worth?

Although we had a few disappointments, for the most part we had a lot of fun doing the various experiments. My daughter especially. And even when the experiments in the guidebooks fell short, we found ways to make them work for us. We never did figure out that thunder pouch, but we now have several exceptionally well-folded paper airplanes.

Perhaps most importantly, it gave me several ideas for simple experiments I can do at home with my daughter that I never would have come up with on my own. (Who would have thought you could create an entire weather system?)

Would I buy it again knowing all that I know? Honestly, I don’t know. I don’t regret my purchase, but next time I might look for a good book of simple science experiments at the library first.

What about you? Where do you find ideas for doing science with your preschooler?