Stone Girl, Bone Girl tells the story of Mary Anning, an extraordinarily prolific fossil hunter born in England in 1799. When Mary began fossil hunting, she did not understand the significance of what she was finding. She was just hunting for curiosities, which she could sell to tourists in Lyme to make a bit of money for her extremely poor family.

Her first major find came at the age of 12, when she uncovered an ichthyosaur. Over the years as she continued to hunt in and around the cliffs of Lyme Regis, Mary Anning found hundreds of fossils, including plesiosaurs, pterosaurs, and several more ichthyosaurs. Although she herself never left Lyme Regis, the fossils Mary found made their way to museums worldwide and contributed to the work of many of the major scientists of the day. Among them was Charles Darwin, who used her fossils to help develop the theory of evolution, which he described in his book, On the Origin of Species, published in 1859. 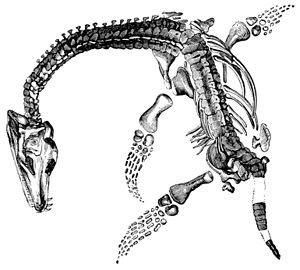 The good: I found this book nearly as interesting as my daughter, and so didn’t mind reading it to her as many times as she asked. My daughter loved that Mary Anning found her first important fossil at the tender  age of 12. I love that she hunted for it despite being laughed at by the other children, and that she persisted in fossil hunting even though it was an odd thing for a woman, much less a 12-year-old girl, to do in early 19th C England. And we both enjoyed the illustrations, which are dramatic and imaginative.

What I didn’t care for: The mysticism surrounding the dog. I didn’t much care for the dog being presented as the spirit of Mary’s father, come to comfort her after his death and find the ichthyosaur for her. And of course, now that I know that it was really Joseph, Mary’s brother, who found the ichthyosaur, I like the way Anholt presented Mary’s dog even less. (Joseph apparently didn’t like fossil hunting and was content to allow his sister to take the credit.)

That said, many details of Mary Anning’s life obviously had to be compressed or omitted altogether to fit the 24 pages allotted to it. What is told is told well, and left both of us wanting to know more about this remarkable woman. And that, in the end, is what you want a biography written for children to do.

In case Stone Girl, Bone Girl also leaves you wanting to read more about Mary Anning, allow me to recommend Tracy Chevalier‘s Remarkable Creatures. It’s a novel, not a true biography, so is also guilty of compressing the facts to fit the needs of the story, but it is exceptionally well-written, and will give you a better sense of the cultural forces working against Mary.

For those of you looking for a more traditional biography, there is Shelley Emling’s The Fossil Hunter: Dinosaurs, Evolution, and the Woman Whose Discoveries Changed the World.

Although wonderful, Stone Girl, Bone Girl isn’t the only children’s book about Mary Anning out there. For the 4-8 year old set, you can also check out:

For a slightly older crowd (9-12), try Mary Anning and the Sea Dragon and Girls Who Looked Under Rocks: The Lives of Six Pioneering Naturalists, both by Jeannine Atkins.

And the young adults in the room can try The Dragon in the Cliff: A Novel Based on the Life of Mary Anning by Sheila Cole.

My daughter and I haven’t read any of these (yet), but you can be certain we will report back when we do.

What about you? Have you read any books about Mary Anning? If so, which one(s) and what did you think?