Lunchbox and the Aliens by Bryan W. Fields

Tucked in amongst all the Warriors books from The Nine-Year-Old’s babysitter was this surprising little gem by Bryan W. Fields. Lunchbox is your average basset hound and knows it — or maybe not. Lunchbox doesn’t really think about much at all, until he is abducted by aliens and starts wondering about all sorts of things that basset hounds don’t normally think about. Like how he suddenly knows exactly how to break into the place where the food is kept, and why he knows so much about these weird creatures he’s started hanging around with. Lunchbox even wonders why it is that he knows that he’s wondering about anything at all.

Why The Nine-Year-Old thinks you’ll like it: “It’s crazy. I’ve been laughing like two times a page in my head. That would probably wake the neighbors up if I laughed out loud. That’s one nutty basset hound.”

President Taft is Stuck in the Bath by Mac Barnett 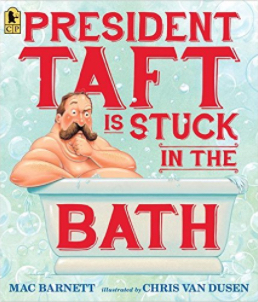 What the book’s about: George Washington led an army into battle. Abe Lincoln saved the Union. According to this book, President Taft got stuck in the bath. Based on rumors of an actual historical incident, Barnett’s book imagines the chaos that must have followed the news that the President had gotten into the bathtub and couldn’t climb out again. It’s a humorous look at a little-known Presidential anecdote, and a subtle reminder to children that embarrassing things happen even to very powerful people.

What the Nine-Year-Old learned from reading this book:

One Response to “What’s The Nine-Year-Old reading this week?”