Merry Christmas! This week, The Eight-Year-Old devours two of the books she found lurking under the Christmas tree, and Mommyo joins the year’s-end list-making frenzy, Caterpickles style. 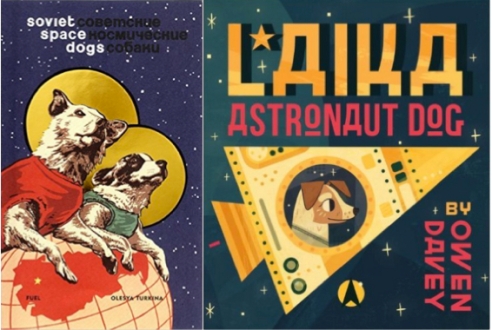 You may remember that a couple of weeks ago, we shared with you a story about the crazy intersection of canine cuteness and Soviet ideology that defined the Soviet space program in the 1950s and 1960s. At the time, I hinted that The Eight-Year-Old might, just might, find a copy of Soviet Space Dogs, which traces this intersection, under the Christmas tree. For once, I followed through on my plan.

But because I have studied The Eight-Year-Old pretty closely over these four years of blogging her every action, I know that Laika’s true story will make her sad. She will want Laika to survive her voyage, and find a suitably happy home. Which is why I bundled a copy of Owen Davey’s alternative history book, Laika: Astronaut Dog, along with it. In his book, Davey gives Laika the happy ending this brave, lonely dog deserves.

You may have noticed this year that the Friday news list wasn’t always that robust (or present). But that doesn’t mean we weren’t reading the news and piling up the requisite number of good intentions about posting it for you on Caterpickles.

For one reason or another, though, we never did. So our contribution to the Annual Year’s End List Making Frenzy is a list of All the News Stories We Wanted to Tell You About But Didn’t Because We Were Off Doing Something Else.

And here they are, in absolutely the order in which I found references to them in my Caterpickles Future News Links Backlog:

Note to Parents: Although I clearly went through a Look-at-this-great-story-I-found-on-the-Huffington-Post phase this year, the Huffington Post is not really a kid-friendly site. No doubt that’s part of why I never got around to sharing the stories before. Huh. Well, too late now.

Merry Christmas! Thanks for reading Caterpickles this year.

5 Responses to “What’s The Eight-Year-Old reading this week?”